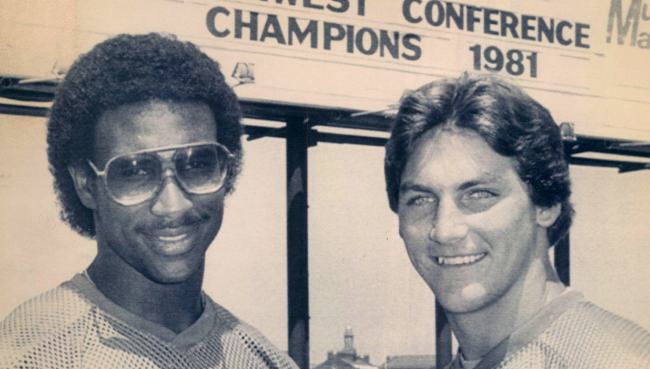 Eric Dickerson probably doesn’t see what all the fuss is about Name, Image and Likeness (NIL) when it comes to college sports. After all, he went to Southern Methodist University in the early 1980s. SMU was a place that paid its athletes so well that the NCAA gave it the “Death Penalty” and ESPN made a 30 For 30 about it.

In fact, Dickerson said in a 1987 speech – just five years after he left SMU – that he was once offered $50,000 in cash by a recruiter to go to another college.

“Just like anyone else, I got it,” Dickerson said about receiving money from SMU. “If I asked for $50, if I needed some spending money, they would give it to me. I never got thousands of dollars or condominiums and all that kind of stuff.”

Pretty safe to say that Eric Dickerson was one of the highest paid football players in college while he attended SMU.

He didn’t take the money (because he didn’t like the school), but added, “I got offered a lot of stuff from a lot of schools. The things they offered, you’re just amazed they could offer.”

One of those things, Dickerson talked about this week with PFT Live was a Trans Am he got from Texas A&M – a school he never actually attended.

“I’ll say this much —- it’s some truth to that story,” Dickerson recalled. “I’ve always said my grandmother bought that Trans Am. And my grandmother did buy the Trans Am. … My grandmother — they got a new car like every three years. They knew I wanted this car, and A&M was pushing hard, talking to everybody in my family. They had me go down to [the dealership] right there off of I-10 and said, ‘Hey, I wanted to look at a car.’ I go down there with them and make a long story short, they come back like, ‘OK, here’s the keys.’ I’m like, ‘What?’ They’re like, ‘Just take the car.’ I’m like, ‘Cool, I get a new car?’

“I got the car and I won’t forget I asked my mom I said, ‘Momma, how did they get this car?’ She said, ‘Don’t you worry about it. Know this here, you’re not going to get in any trouble behind this car.’ I said, ‘OK.’ Years later after I finished playing pro football, I asked my grandmother I said, ‘Why did I get that car?’ She said, ‘Eric, we paid for that car. We paid for the car — and they gave us money back for the car.’ That was it. They gave them the cash back. So that’s it.”