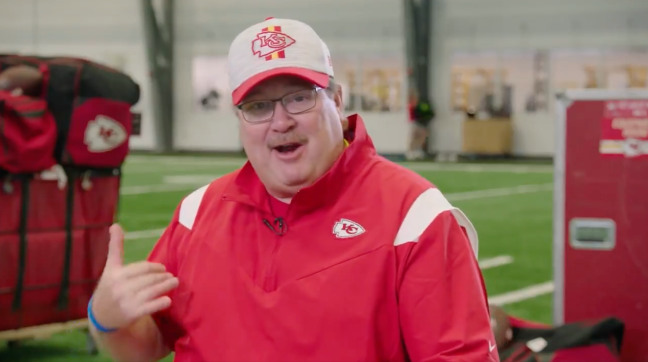 With the NFL football season nine days away, the Chiefs decided to give head coach Andy Reid the day off. In his place, Andy’s much funnier younger brother Randy was in charge of Kansas City’s practice earlier this week.

Sorry, accidentally hit send… It's Head Coach Andy Reid's younger brother, RANDY REID!! I got the keys to the Kingdom and I'm gonna rock the mic all day long!!! Let's get this party started!!! pic.twitter.com/xRdzvJPIIz

Randy Reid, better known as Eric Stonestreet, got into some hilarious shenanigans. Stonestreet is most recognized for his role as Cam in Modern Family and is a native of Kansas City who loves his hometown teams. His role as Randy is pure gold.

The night before taking the field, Randy decided to play a prank on his star quarterback.

He placed a fake cricket in Patrick Mahomes’ room that chirped every 10 minutes while the 25-year-old slept.

Stonestreet walked over to tight end Travis Kelce and let him know about the practical joke. Unprompted, Kelce and Mahomes had just talked about how there was a bug in his room all night and when Stonestreet found out, he was loving it.

We didn’t get to find out whether Stonestreet told Mahomes about the cricket-inspired noise machine, but surely the $500 million quarterback was relieved when he got into bed the next night without the constant chirping.

At another point during Randy’s reign, he tried to sell some of the Chiefs players his drones.

CALL NOW if you’re interested in either a drone… or a jet ski…? Actually do call the working number, it’s very funny.

As for Randy’s coaching style, he tends to enjoy inspiring anger in his players to get them performing at their full potential.

Sup Kingdom?!?! I'm baaaaaaack!! Brett Veach left his office unlocked hahahahah!!! Like the Chiefs, I will not be stopped!! 😈😈😈 pic.twitter.com/nSyIE7Cd3m

Michigan does suck, he’s not wrong. Andy Reid was back at practice on Friday, but Randy’s campaign for a Super Bowl ring continues.