Ernie Johnson Says, As Heated As They Can Get, Barkley And Shaq Never Get ‘Out Of Control’ 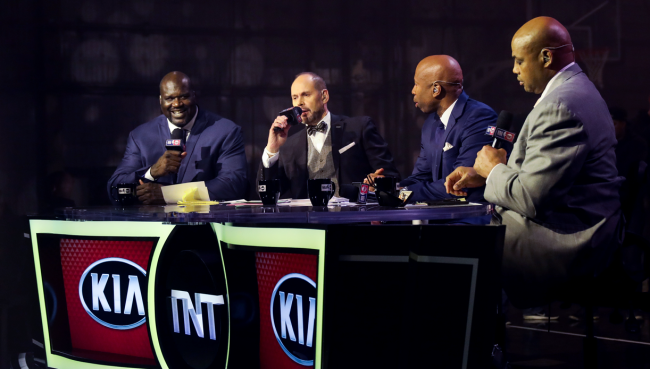 TNT’s Inside the NBA is one of the most entertaining shows on television. Many nights, the banter between Ernie Johnson, Kenny Smith, Charles Barkley and Shaquille O’Neal is significantly more entertaining than the game that night.

Much of the entertainment stems from the relationship between the two NBA Hall of Famers (sorry, Kenny).

One many occasions, Barkley and Shaq have gone at it, hard, arguing over one thing or another. Usually, the sillier the topic, the better the show is.

This week, the man in the middle of it all, Ernie Johnson, visited The Dan Patrick Show and was asked about the bickering that goes on between Chuck and Shaq.

“You have the moment where it feels like Shaq and Charles are getting personal and this happened the other night, where it felt like it was a little more personal with each other out in San Francisco,” Patrick pointed out to Johnson.

“What role do you play when you know that this might not be what we thought it was going to be?”

Ernie Johnson explains the relationship between Shaq and Chuck

“I mean, folks need to understand too that these guys are so tight,” Ernie Johnson replied. “Their families, their moms were extremely tight when Chuck’s mom was still around and and we talked to Miss Lucille from time to time, so they actually are good, are great friends The guys love each other.’

“Sure, it gets heated sometimes, and when you’re trying to decide or trying to defend your point, yeah, it gets a little heated. But I’ve never thought, ‘Uh oh this is out of control.’”

Johnson then admitted that sometimes he tries to diffuse the situation with a big fake laugh and a “Okay, let’s move on.”

“Then you realize, there was really nothing to diffuse, it’s just TV,” Johnson continued. “But then, obviously social media after that says, ‘well they’re ready to throw hands., this if fixing to get’ you know, and it really isn’t.”

Patrick then brought up the fact that Shaquille O’Neal, when losing a argument, often pulls out his trump card of winning four NBA titles to Barkley’s zero.

“It’s always the fallback,” said Johnson. “I always know that any disagreement is about to end when that’s brought up. That’s like Shaq’s last line of defense.”