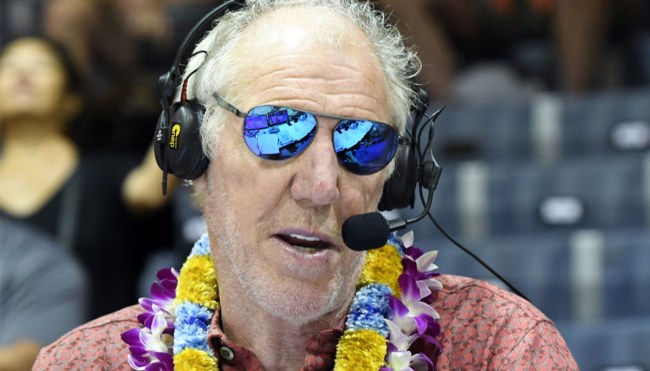 You never know what you’re going to get when you tune into a college basketball game featuring Bill Walton sitting at the announcer’s table, as the iconic player and broadcaster is one of the most notoriously unpredictable people on the planet.

In addition to antics like swallowing a lit candle and deciding to chow down on some peanut butter while doing a job that requires him to talk on live television, Walton routinely goes on hilariously long tangents that have almost nothing to do with what’s unfolding on the court.

The fact that Walton is usually tasked with covering Pac-12 games that air in the late hours of the night undoubtedly plays a role in the fact that ESPN has traditionally given him a fair amount of leeway when it comes to what he says on the air, and we’ve been treated to some wildly entertaining ramblings about cycling through the mountains and the wonderous nature of bridges as a result.

However, it would appear Walton finally managed to go too far for the network’s liking on Thursday night.

Midway through the first half of the showdown between Stanford and Arizona, Walton turned his attention to current events when he began to predict what would happen if Russia invaded the United States.

However, we never got the chance to hear what he thinks would unfold if that ended up being the case, as his audio abruptly cut off after he floated the possibility in what appeared to be a conscious decision to cut his mic.

Given the current climate and Walton’s erratic nature, you can’t necessarily blame who made that decision for erring on the side of caution, but you have to wonder if this will get more attention than whatever he was planning to say ultimately would’ve garnerd.