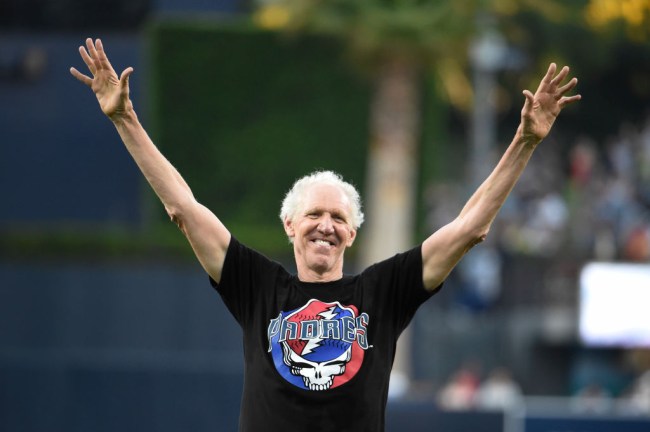 Personally, I can’t get enough Bill Walton. PAC-12 games where he’s court-side with Dave Pasch are appointment television in their unpredictable moments and magnificent absurdity.

Let’s take stock of some recent Walton moments, all captured during ESPN broadcasts:

–Rubbing chocolate on his face

–Taking off his shirt and talking about bridges

–Wait, how long hasn’t he taken an indoor shower?!

Fresh off a stint as Father Time (again!) with Wavy Gravy at Dead & Co’s San Fransisco New Year’s Eve show, Walton was live in Eugene with Dave Pasch for Oregon-Arizona. Somehow a jar of peanut butter got introduced into the mix, resulting in Walton scooping it out with his fingers and eating it.

These tweets are sequential, crescendoing in absurdity:

Here is Bill Walton trying to rub peanut butter on Dave Pasch and then waxing poetic about peanut butter pic.twitter.com/9BATxNk48H

It only got weirder from there.

Bill Walton eating peanut butter during the Oregon vs. Arizona broadcast, because why not? pic.twitter.com/oCLlFPfYK2

Bill Walton eating peanut butter with his bare hands with a Oregon football helmet on live TV is the greatest moment in sports history pic.twitter.com/JGPnxPm5l6

And yes, that is Mario Cristobal and his son. Mario’s response here is legendary:

Bill Walton is trying to get Mario Cristobal's son to eat peanut butter with his finger out of the same jar Bill is and Mario is not having that. Bill is also wearing a football helmet pic.twitter.com/k9GrVneu5L

Walton’s shenanigans are lore at this point, bringing a Shakedown Street parking lot vibe to these PAC-12 hoops broadcasts.

Last spring, I heard an awesome story from one of Ken Kesey’s Merry Pranksters about Bill Walton accompanying the Grateful Dead to Egypt in 1978 to play at the Gaza pyramids. Walton was apparently in rare form on that trip. He apparently looked absurd on a camel given his height.

Brandon Wenerd is a founding partner at BroBible and the site’s publisher. He’s waiting for Phish to announce summer tour at the moment, but also excited for the Disco Biscuits to finally announce some west coast dates. Follow him on Twitter here and Instagram here.