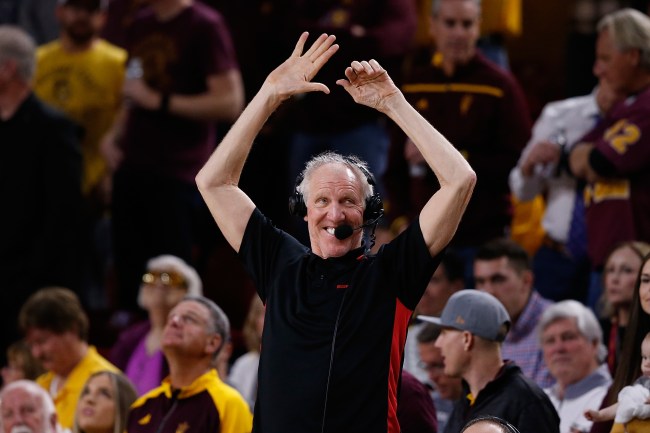 Bill Walton is a seven-foot-tall content factory. Whether the Hall of Famer is swallowing a lit candle on live television or sending batshit crazy text messages to his broadcasting partner Dave Pasch about “stampeding goats,” I would permit any and all Walton content to be injected straight into my veins.

Last night’s Utah vs. Arizona men’s basketball game was no different. Out of thin air, Walton brought up how a decade ago he was on the brink of committing suicide and seamlessly transitioned into rubbing chocolates on his face like a giddy child. He may be the only person on the planet who could make suicide talk funny and endearing.

In Walton’s 2016 autobiography, Back From The Dead, the 66-year-old admitted to having suicidal thoughts in 2009 as he suffered a spinal collapse that eventually took special surgery to fix.

“When you’re lying there and you have nothing and you can’t move, you can’t think, eat or sleep, that’s the clearest path,” Walton wrote.

The Grateful Dead superfan said that he was able to completely shift his mindset with the help of his wife.

“Now that I’m all better, it’s the furthest thing from my mind,” he continued. “But when you’re there, it’s all so very clear, so don’t ever discount [it] …My wife was so smart, she never left my side during this whole time. When she did have to leave, she made sure there was somebody who knew what they were doing right next to me. What happens along this journey is when you hit bottom — and I hit bottom — then everything becomes easier. Then you’re able to start climbing up and you understand the incredible chance you have. And that’s all I ever wanted was a chance, a chance to chase my dream.” [via]