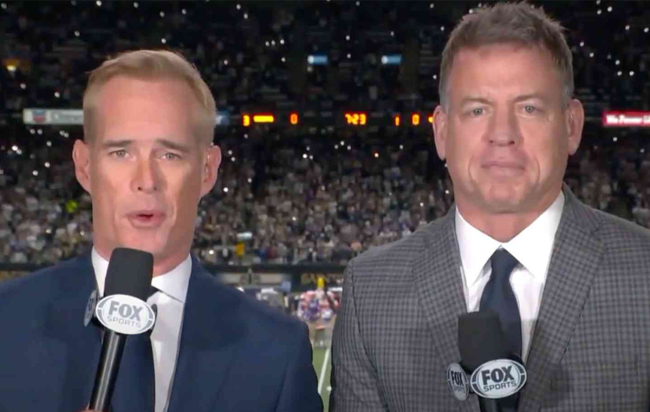 ESPN is making some major moves this offseason to bolster its NFL broadcast team.

According to NY Post’s Andrew Marchand, the Worldwide Leader in Sports, is close to signing Troy Aikman in a massive deal to make him the lead analyst for their Monday Night Football broadcast.

Hall of Famer Troy Aikman is expected to leave Fox Sports to become the main analyst for ESPN’s “Monday Night Football,” The Post has learned.

Aikman’s ESPN deal will be for five years, according to sources, and his yearly salary is expected to approach or exceed the neighborhood of Tony Romo’s $17.5 million per year contract with CBS. The deal is not yet signed, but it is near completion.

Marchand reports that ESPN will also attempt to pry away Joe Buck from Fox Sports to pair him up with Aikman on Monday Night Football.

NEWS COLUMN: Troy Aikman is leaving Fox Sports for ESPN and he could bring Joe Buck with him, The Post has learned. https://t.co/XIwmM297db

While ESPN has considered making a run at Michaels — it hasn’t done so yet — there is another wild possibility.

With Joe Buck’s contact up next year, sources said ESPN could try to pry Buck from Fox. Buck also calls the World Series for the network. Fox would have to grant Buck permission if he wanted to leave early.

ESPN currently has Steve Levy, Louis Riddick, and Brian Griese as its lead “Monday Night Football” broadcast team but it’s clear that lineup will no longer be the A-team going forward.