If You Haven’t Watched LeBron James’ ‘More Than An Athlete’ On ESPN+ Yet, You’re Definitely Missing Out 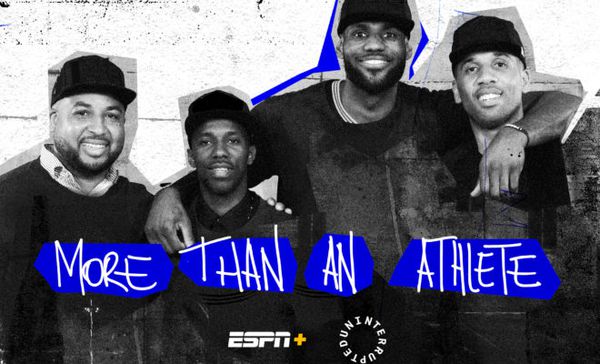 LeBron James is the most polarizing athlete on the planet. But, as we all well know, the Los Angeles Lakers superstar is more than just an athlete, as he’s proven to do more off the court than he could ever do on it. And, fittingly, the show that he and ESPN+ teamed up for, called More Than An Athlete, blends together how James and his four longtime buddies — Maverick Carter, Rich Paul and Randy Mims — have been able to define all that athletes can do.

As someone who’s a big-time LeBron James fan after seeing “The King” play in high school, I can tell you that binge-watching More Than An Athlete on ESPN+ this past weekend was well worth it. I had heard friends talk about how powerful the different episodes were, but, man, talk about A+ content. James, Carter, Paul and Mims don’t hold anything back while the cameras are running, openly talking about the struggles they had growing up, while discussing what’s kept them bonded together into their adult lives.

From being high school teammates with Maverick Carter — who’s now his business manager — meeting his agent Rich Paul on a flight and bonding over a throwback jersey, or once living with Mims before reaching the NBA, LeBron James and his best friends detail their entire lives together, and ESPN+ does an incredible job delivering the story. They discuss The Decision in 2010 for James to leave Cleveland for the Miami Heat. They talk about how they’ve built an empire in media and business. They candidly put their emotions on display.

Even if you’re not necessarily a LeBron James fan, the ESPN+ show is a must-watch, as More Than An Athlete serves as an inspiring narrative of a couple friends who worked together to make something bigger than they could imagine. And it all came from one thing: basketball.

For those who don’t have an ESPN+ subscription yet, it’s definitely worth it. Not only does a it cost $4.99/month — with an annual payment option of $49.99/year — but it brings you sports in a way that no other place can. Seriously, I haven’t even scratched the surface of the service yet, but you can be sure I’m about to watch even more 30 for 30 films and live events.

Plus, for those mega UFC fans, as mentioned, ESPN+ is the exclusive home for all the badass action. So check out some of the programming on ESPN+ that you’ll get to watch all the hard-hitting action.

Whether you’re someone like me who loves ESPN+ for the 30 for 30s, want it for the exclusive UFC content, live events or original series’ like Detail: From the Mind of Kobe Bryant or Alex Morgan: The Equalizer, among others, every single sports fan should include the streaming service into their monthly budget. The fact that it costs just $4.99/month — or $49.99/year — is just an added bonus.