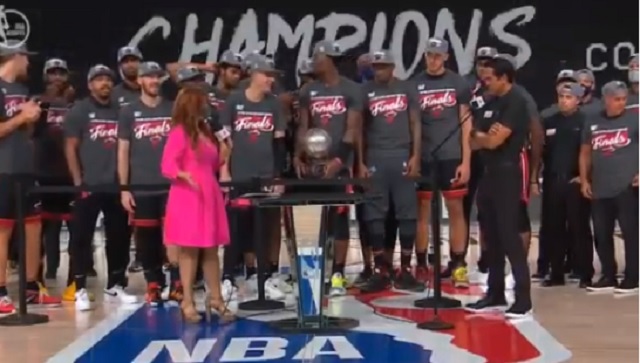 The Miami Heat and LeBron James have a long complicated history and while that history is going to be a major storyline once the finals start Heat coach Erik Spoelstra isn’t ready to talk about it just yet.

Immediately after the Miami Heat eliminated the Celtics from the playoffs on Sunday night, ESPN’s Rachel Nichols tried to ask Spoelstra what it was going to be like to face his former player in the finals. Spoelstra, who was still celebrating his Eastern Conference championship win, shut Nichols down and said he wanted his team to enjoy the moment before thinking about LeBron.

Nichols: This is the organization’s first trip to the finals since 2014 you had a player then by the name of LeBron James, You Will now be facing him in the NBA finals what is that going to be like.

Spoelstra That’s a great storyline right? Can you let us enjoy this for a little bit right now. This is hard to do. It’s hard to get to this point and I want our guys to recognize that and acknowledge it for at least tonight and then we’ll get on to that tomorrow