Kendrick Perkins has addressed the backlash he received after appearing on the latest edition of ESPN’s “The Jump.’

After the NY Times released an audio recording of Rachel Nichols saying Maria Taylor was a “diversity” hire, Nichols addressed the situation alongside Kendrick Perkins and Richard Jefferson on Monday.

Rachel Nichols opened an episode of “The Jump” a few minutes ago by apologizing. Her full comments: pic.twitter.com/WOtEXy79Ea 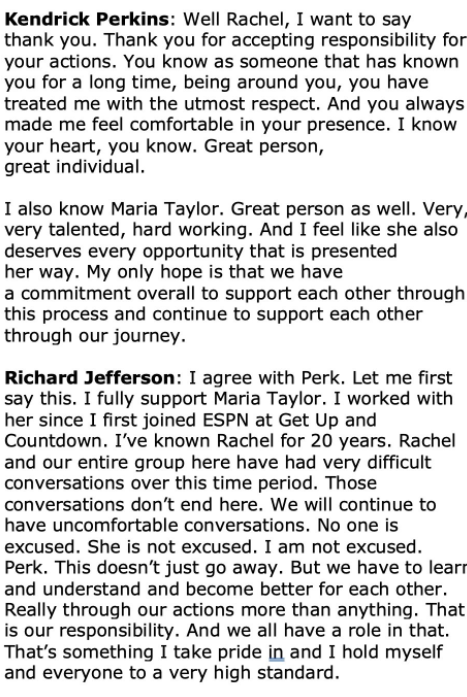 Perkins and Jefferson received criticism over their appearance during the Nichols’ apology.

Disappointed in @Rjeff24 & @KendrickPerkins . Tell @Rachel__Nichols "Admit you meant what you said, you weren't blowing off steam & because you said it, it's now @MariaTaylor 's response that is being made out to be the problem" Can't believe you two don't see that

@KendrickPerkins Perkins acting like @Rachel__Nichols treating him kindly to his face is a departure from how she treated Maria. The point is she was kind to her face, but racist behind her back while speaking to her white buddy. That half-behind apology does not cut it @espn

Hours after “The Jump” aired, Kendrick Perkins jumped into a Twitter Spaces conversation to defend his appearance during Nichols’ apology.

Kendrick Perkins jumps on spaces and defends his appearance on “The Jump” today during Rachel Nichols apology over the Maria Taylor comments pic.twitter.com/4MP4SCAGKh

“I’m saying that you can be mad with whoever else but at the end of the day Kendrick Perkins didn’t have anything to do with none of this conversation. Kendrick Perkins was scheduled to be on “The Jump” regardless before this even came out yesterday. Now I had to address it and I thought I addressed it appropriately, I thought I handled it appropriately, well for one I spoke and acknowledged Rachel for however you want to say her apology was, she apologized and I also said that she had never done anything towards me because she didn’t…and I gave Maria her flowers…At the end of the day I can’t go out there and go off and go crazy and risk losing my job because some people want me to go on there and speak for how they feel “