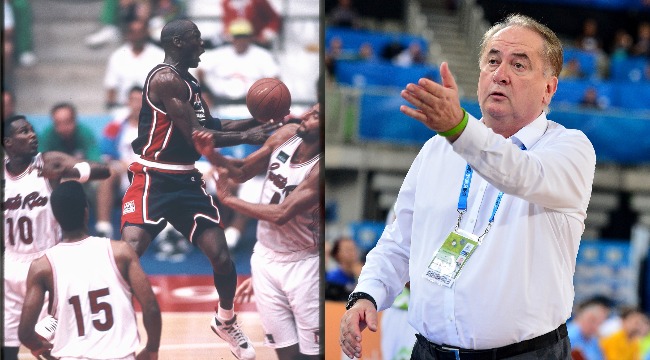 There are people walking among us who prefer yellow Starbursts over pink, Leto’s Joker over Ledger’s, and the scent of others’ farts over their own.

There are very few things mankind can universally agree on, but today we can all unite around shouting down this offensive take from one of the most successful pro basketball coaches in all of Europe, Bozidar Maljkovic.

Maljkovic, who’s won four EuroLeague titles with three different clubs and now serves as president of the Olympic Committee of Serbia, once claimed Michael Jordan would’ve been an ‘ordinary player’ had he played on another continent, averaging just 16 points per contest.

The revelation came from former NBA star John Salley, who played for Maljkovic’s Greek Panathinaikos team just after being part of the Chicago Bulls’ 1995-96 title team. Before signing, Salley had consulted with Bulls teammate Toni Kukoč, who starred on Maljkovic’s KK Splits team in Croatia before making the jump to the NBA.

In Jeff Pearlman’s book Three-Ring Circus: Kobe, Shaq, Phil, and the Crazy Years of the Lakers Dynasty, Salley claimed that Maljkovic’s warmed-over cat poop take was all it took to know he wouldn’t be there long.

“Salley tells that as soon as they were introduced, Maljkovic told him that Michael Jordan (with whom the power forward had just been champion) was ‘an ordinary player’ and that ‘in Europe, he would average 16 points per game.’ At that time, according to this book, Salley had it clear: ‘There I saw that it would last a short time there.’ It was, finally, seven weeks.”

In simpler terms, Michael Jordan would be nothing more in Europe than Tyler Herro is in the NBA. Actually Herro is averaging 17 per game this year so that’s an insult to him. Maybe Dion Waiters in his prime. Or half of James Harden.

Interesting side note on Salley’s unceremonious end with Panathinaikos: He bailed on the team mid-season to take meetings with TV executives in the States about potentially hosting a show for Disney. He ended up renting a private Lear jetin Paris for $20,000 and then hopped on a private helicopter to take him to his team’s Greek Club game. He arrived an hour before tip-off and Maljkovic sat him anyway. So Salley bailed.

To close the loop on Jordan: In 1984, before turning pro, a 21-year-old Jordan led the US team in scoring at the Los Angeles Olympic Games, averaging 17.1 points per game. The team claimed Gold, went undefeated in the tournament, and won by an average of 32 points per game.

At the time, Bobby Knight’s assessment of Jordan differed slightly from Maljkovic’s. Just a tad.