Everything You Need to Know About UFC 268: Usman vs. Covington 2 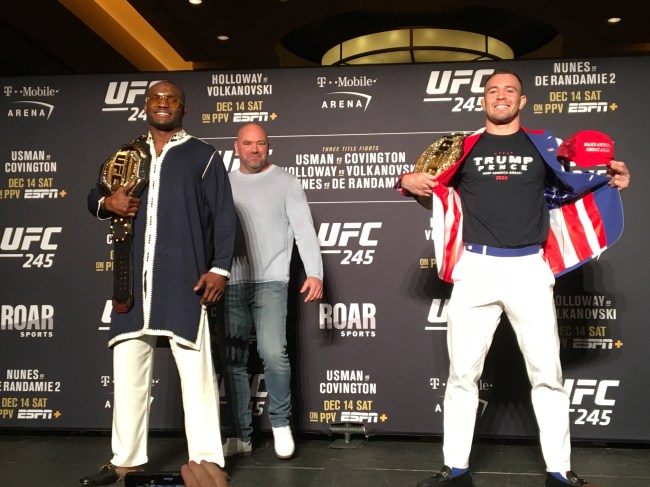 Wanna see the best mixed martial arts has to offer? Then look no further than UFC 268, which goes down this Saturday (November 6, 7 p.m. PST / 10 p.m. EST on ESPN+ PPV), live from the world’s most famous arena, Madison Square Garden.

A massive fight card with incredibly high stakes, UFC 268: Usman vs. Covington 2, which is co-headlined by a pair of title fight rematches, is one of the best and deepest fight cards of the year. There are big names, heated rivalries, legends of the sport, and fan favorites. There are even a few intriguing UFC debutantes on the card, along with a slew of important matchups, and what is being anticipated as one of the most violent fights in UFC history.

With fighters like Usman, Covington, Namajunas, Zhang, Gaethje and Chandler on the card, UFC 268 has all the name value any fight fan in 2021 could hope for. And, with that type of cache on the marquee, there is little doubt that UFC 268: Usman vs. Covington 2 will deliver.

So, rather than futzing around any longer, let’s dive into the card.

Is Usman vs. Covington the Best UFC Welterweight Rematch of All-Time?

No doubt, the UFC 268 main event is the main story here.

Why wouldn’t it be? It’s not only an incredible fight, but it’s a fight we’ve seen before, nearly two years ago, when Kamaru “The Nigerian Nightmare” Usman, the top pound-for-pound fighter in the UFC, finished Colby “Chaos” Covington via fifth-round TKO at UFC 245.

Earning the runner-up spot for 2019’s Fight of the Year, the first bout between Usman and Covington was an instant classic. While both fighters have always been known for their wrestling prowess, both Usman and Covington decided to keep the fight on the feet and settle their heated rivalry with their fists. Many, many, many fists.

With Usman winning the first bout, the stage is now set for the rematch. But can it outdo the first fight? And, can it earn the top place in UFC welterweight rematch history?

The first fight between Usman and Covington was a non-stop, back-and-forth war that lasted nearly the entire 25 minutes. With the scorecards literally split going into the fifth round at UFC 245, Usman unloaded on Covington in the fifth frame to earn the stoppage. And, while Usman forced the finish in the previous bout, there’s no doubt that Covington gave Usman his toughest fight in the UFC that night, prompting the rematch.

To expect the Usman vs. Covington rematch at UFC 268 to eclipse the first fight would be unfair, though. However, when two mixed martial artists this highly skilled meet in the Octagon, it’s reasonable to expect a non-stop war between bitter rivals.

In historical context, Usman vs. Covington 2 will need to be just as brutal as the first fight to earn distinction as the top welterweight rematch in UFC history, which currently belongs to the 2015 rematch between then-champion Robbie Lawler and Rory MacDonald at UFC 189. With rivals like Georges St-Pierre and Matt Serra, GSP and Matt Hughes, Hughes and Frank Trigg, and Lawler and Johny Hendricks all fighting rematches for the UFC welterweight title, Usman and Covington have their work cut out for them.

Still, don’t be surprised if Kamaru and Colby deliver one of the best fights of the year.

Can Rose Namajunas Continue Her Rematch Streak Against Zhang Weili?

Note to any up-and-coming strawweight fighters: Don’t ever give UFC champion “Thug” Rose Namajunas a second chance to beat you. She’ll totally take advantage of the opportunity.

A two-time UFC strawweight champ, Namajunas began her second reign as the queen of the 115-pound division this April, when she obliterated former champ Zhang “Magnum” Weili with a lightning-quick first round head kick (and follow up punches). The two will now embark on the immediate rematch, which, when examining history, doesn’t favor Zhang.

With only 14 fights during her eight-year pro MMA career, “Thug” Rose has already fought a trio of rematches heading into UFC 268. She’s won every single one, including a pair of slick and technical decisions over former champions Joanna Jędrzejczyk and Jessica Andrade.

It wouldn’t be fair to count Zhang out just based on historical context, though. She is, afterall, a former UFC world champion, with incredible power and athleticism. She also won the greatest fight in women’s MMA history, when she outpointed Jędrzejczyk in a brutal affair at UFC 248, so it’s clear that she’s a worthy opponent. It’s just tough to pick against Namajunas in this spot.

Taller, longer, and slicker, Namajunas has the striking game and footwork to make Zhang work tirelessly to get in close for the clinch. And, on the ground, while Zhang may have a bit of a strength and wrestling edge, “Thug” Rose is known for her dynamic submission game. Although she hasn’t really needed it of late.

While it’s tough to expect the UFC 268 main event to outperform the first installment, I fully expect the co-main event between Namajunas and Zhang to outdo the first fight, which lasted all of 78 seconds. In this case, Namajunas vs. Zhang 2 will, no doubt, be much more competitive than the previous bout, so expect a technical standup fight.

Is This It For UFC Legend Frankie Edgar?

Anyone who’s been following the UFC for the last 10 years or so knows Frankie “The Answer” Edgar. The former lightweight champ, who has spent more than seven hours and 40 minutes fighting inside the UFC Octagon, became known for his ability to outpace, outwrestle, and outbox fighters far bigger than he, earning a trio of victories over B.J. Penn, along with notable wins over current UFC lightweight champion Charles Oliveira, Gray Maynard, and Urijah Faber.

For over a decade, Frankie Edgar has delivered incredible highlights in the Octagon, but, having just turned 40 a few weeks ago, “The Answer” is supposedly contemplating retirement. In fact, many believe that his UFC 268 fight against Marlon “Chito” Vera, which was bumped up to the featured spot, will be his last pro MMA bout.

That’s something worth tuning in for.

Never one to take the easy road, Edgar, who is currently ranked seventh in the UFC bantamweight division, will face a hungry and dangerous Vera in his swansong. Vera, of course, is best known for derailing the “Sugar” Sean O’Malley hype train, and is always a tough out inside the Octagon.

Taller and longer than Edgar, Vera has a very high level Brazilian Jiu Jitsu game, but Edgar’s wrestling prowess, when combined with his BJJ black belt skills, make him a major threat on the ground.

Both Edgar and “Chito” have several paths to victory in this one, so it will likely come down to Vera’s ability to land punches and kicks from the outside and keep “The Answer” at bay. However, if Edgar can get in close, he has the ability to dirty box in the clinch and drag the fight to the mat.

I’d be lying if I didn’t have a dog in this race. As a New Jersey native who just turned 40 myself, I’ve always been a believer in Frankie Edgar. He represents the code and honor of martial arts, while fighting the best MMA has had to offer for the last decade. He’s a true legend, so expect a legendary finish to Edgar’s great career. And by legendary, I mean a wrestle-heavy contest that goes the full 15 minutes.

Is Gaethje vs. Chandler the Best Matchmaking in UFC History?

Long before Justin “The Highlight” Gaethje and “Iron” Michael Chandler were even in the UFC, MMA fans were hypothesizing a potential matchup between the former World Series of Fighting and Bellator MMA champions.

Known for their power, speed, dynamic finishing abilities, and, well, sheer craziness, Gaethje and Chandler dominated in their respective promotions for years before signing with the UFC. And now that they’re both here, UFC matchmakers Sean Shelby and Mick Maynard have paired the two in a pivotal fight with title shot implications.

It also happens to be the sexiest piece of matchmaking, well, perhaps ever.

With Gaethje currently ranked second in the lightweight division, and Chandler sitting in the fourth spot, this fight at UFC 268 will likely determine the next challenger for the UFC lightweight title after current-champ Oliveira and Conor McGregor-killer Dustin Poirier square off at UFC 269. And, with such high stakes, it’s a guarantee that both Gaethje and Chandler will hunt for the finish from the opening bell. That’s probably one of the reasons that the UFC recently decided to move this bout, which will now kick off the UFC 268 PPV main card on ESPN+.

Booked for three rounds, Gaethje and Chandler likely won’t need the entire fifteen minutes to determine a winner. Both fighters are known for pressing forward and delivering punches and kicks with major power and reckless abandon.

It’s bound to be a firefight, and very likely, one of these two is going to sleep inside the Octagon.

The Debutantes of UFC 268

I’m not ignoring the Shane Burgos vs. Billy Quarantillo fight on the UFC 268 PPV main card. It’s yet another great piece of matchmaking, and an intriguing stylistic matchup. However, it’s also important to highlight a pair of fights on the UFC 268 prelims, which air on ESPN+.

Garry is all the rage over in Europe right now, recently winning (and then vacating) the Cage Warriors welterweight title. It’s always interesting to see the talent out of Ireland, and Garry has a super impressive and well-rounded MMA game.

Already 34 years old, Pereira is not your average UFC debutante, on account of his history with UFC middleweight Israel Adesanya, over whom he owns a pair of kickboxing wins.

It’s a longshot, but keep an eye on Pereira. He may just begin his road to a title shot at UFC 268.

Less than one week removed from a stellar UFC 267 card, UFC 268 somehow manages to improve on the previous fight card. UFC events in New York at Madison Square Garden just feel bigger, and this one is no different.

UFC 268: Usman vs. Covington is gonna be massive.