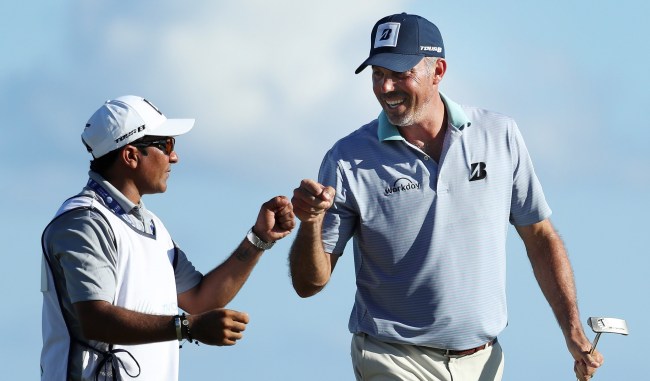 I am guessing that right about now PGA Tour pro Matt Kuchar might be regretting being such a cheapskate when it comes to how much he tipped a caddie last November.

In case you missed it, the controversy surrounding Kuchar developed when Kuchar hired local caddie David Giral Ortiz, aka El Tucan, to work the bag for him at the Mayakoba Classic in Mexico – an event where Kuchar won and pocketed $1,296,000.

Let me do the math for you. Kuchar paid Ortiz 0.38% of what he won that weekend. Normally, caddies receive anywhere from five to 10 percent of whatever their pro wins.

Needless to say, when word leaked out about the payment, people couldn’t believe it – including those who work or have worked on the PGA Tour.

When asked about Kuchar’s terrible tip by Keith Olbermann on ESPN, former PGA caddie, Michael Collins had this to say…

“Keith here’s the easiest answer I can give you,” Collins told Olbermann. “If Kuchar was in the right, how many PGA Tour pros are coming out defending what he did? I’ll wait, and so will everyone else.”

For the record, Kuchar does indeed believe that he is in the right.

The Golf Channel reported that Kuchar saidm, “I ended up paying him $5,000 and I thought that was more than what we agreed upon. I kind of think, if he had the chance to do it over again, same exact deal, that he’d say yes again.”

Collins went on to tell Olbermann, “A couple of players told me that if right after the tournament he writes the guy a check for $35,000 — which is still less than 5% of a commission — he would have been seen as a hero. Now most of the players and caddies I talk to have said $50,000 is the number, and one player said, even if he pays $50,000, [Kuchar] is still never going to live it down.”

I don’t know about you, but I can’t wait for the next time a PGA gallery shouts their usual, “Kuuuuuuuuuuch,” only this time, that won’t actually be the word they’ll be using.

UPDATE: The trolling has already begun.