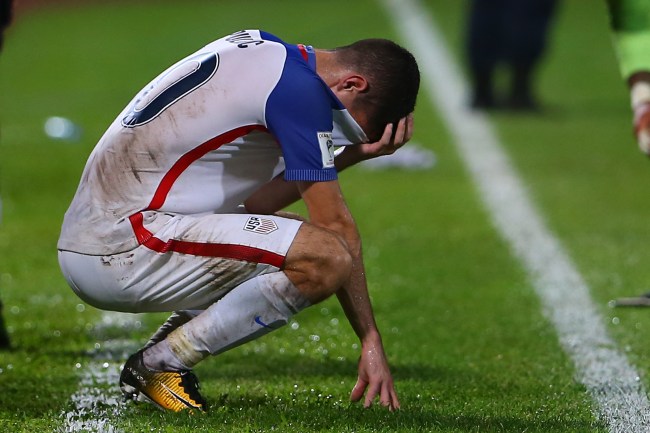 Despite TV ratings in the USA being down, the 2018 FIFA World Cup has been one of the best World Cups in years. Germany, Brazil, Spain, Portugal (Ronaldo), Argentina (Messi), Peru, Mexico…all of these Top-15 ranked teams failed to advance and now it’s down to the #3 (Belgium), #7 (France), #12 (England), and #20 (Croatia) ranked teams in the world. If you look at the FIFA Men’s Rankings you’ll have to scroll down to #25 to find the USA, a team who failed to qualify for the 2018 World Cup. To be clear, this is just a problem with the USA Men’s team. The women have been kicking ass on the world stage for decades.

The all-time best finish for the USMNT was in 1930 when they finished in 3rd place, since then it has been all downhill. Since 1934, the best finish the USMNT has had in the FIFA World Cup is an appearance in the Quarter Finals (2002). At some point, everyone who follows soccer wonders why the USA sucks so bad at soccer’s highest levels. The United States competes for Gold in pretty much every other major sport on the planet. Basketball, Baseball, Hockey, every Winter and Summer Olympics sport. But why not Soccer? Here, some experts try to explain why the USMNT sucks so hard:

This video does a good job at illustrating why the USMNT sucks at the highest levels, and they do that by explaining there isn’t one reason. There are a bunch of different factors that go into why the U.S. men don’t compete on the world stage even though the USA is the world’s third largest country.

Whenever I’ve talked with people from other countries about this, I’ve always gotten the sense that they think we’re full of shit when we say that our top athletes in the NBA, NFL, or NHL who would’ve been great at soccer went to other sports because it pays better. Non-Americans hear this and they think it’s hubris. As if, since the athlete’s talented in X he could never compete in Y. Which may be true in a lot of instances, but when the USA’s top talent pool is getting split between every pro sport outside of Soccer it’s impossible to know. What we do know is there have been plenty of extremely successful multi-sport athletes in the USA (Bo Jackson, Deion Sanders, Michael Jordan, etc).

The good news is the USMNT has some excellent players on the horizon and the MLS is finally coming into its own after all these years of existence. Christian Pulisic is over in Germany growing into one of the top players in the world. Things are bright. But the dedication to growing Soccer in the USA still isn’t there on the level it is across the globe, at least not at the moment.