Why’s Ezekiel Elliott Fumbling So Much? One (Ridiculous) Theory Has To Do With His Sleeves. No, Really 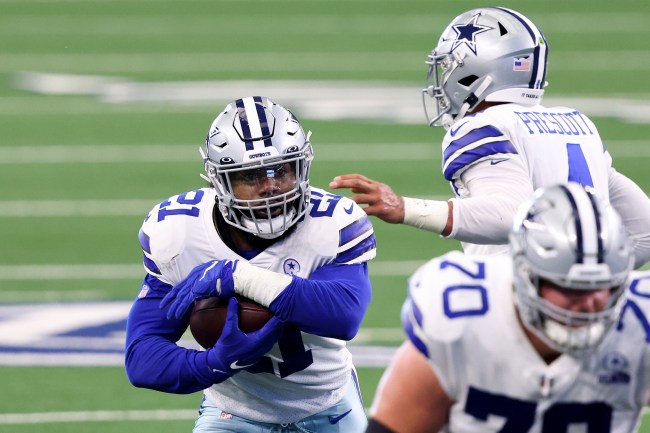 It hasn’t exactly been a great year for Ezekiel Elliott and the Dallas Cowboys so far. Not only does “America’s Team” find themselves underachieving with a 2-4 record — which is still good enough for first place in the dreadful NFC East — but the star running back has seemed to pick up a bad habit for any NFL player: fumbling.

After Zeke lost two fumbles during Dallas’ Monday Night Football loss to the Cardinals, Elliott was seen on the sideline clearly in his own head, upset with himself for putting the ball on the turf. Hell, Cowboys’ coaches even gave him a breather for the bulk of a drive for him to cool down a bit. Even after the game, Ezekiel Elliott was talking about his fumbling issues — which has now reached five total fumbles with four lost fumbles this season — and squarely took the blame for the blowout drubbing on MNF against the Cards.

“I’m just going to keep saying it over and over – I started the game out with two fumbles, gave the ball away and gave them all the momentum they need to go take off,” Elliott said. “ I want to say I’m sorry and this one is on me. I need to be better.”

While Elliott is taking ownership in his fumbling problem, some fans are wondering what’s to blame for developing such an issue, since this isn’t a habit that most superstar running backs just develop overnight. Is it lack of focus? Laziness when holding the football? Or, quite possibly, could it be Elliott’s long sleeves beneath his jersey?

Well, if you read the headline, you already know what some NFL fans on Twitter think, because we’ve reached the point of full insanity: People think long sleeves are responsible for Zeke fumbling so much. Just take a look at what some people on social media had to say during last night’s game.

@EzekielElliott no more long sleeves bruh. Those got to go. That should fi that problem a little bit

@EzekielElliott Ditch the long sleeves dude. You get no feel or grip for the ball my guy. Simple solution. #DallasCowboys #Zeke #MondayNightFootball @dallascowboys

Ezekiel Elliott coming out of the locker room in long sleeves ready to fumble twice in the first half pic.twitter.com/BRVuzW9sa6

I have a feeling Ezekiel Elliott’s fumbling problem is because he is wearing long sleeves. The ball slides off the shirt and not skin. I’m convinced if he started wearing short sleeve he would do better. @dallascowboys @EzekielElliott

This is absolutely absurd. Like, no. No, no, no, Ezekiel Elliott fumbling so much has nothing to do with the fact that he has long sleeves on beneath his jersey — but it’s hilarious to see how fans have legit convinced themselves it’s absolutely the root of the problem. Want to know what it does have to do with? His poor ball skills and lazy handling of the football, with the dude literally just hanging the damn thing out there away from his body for opponents to punch at. Long sleeves, short sleeves, no sleeves, that’s why Zeke is coughing off the ball so much this year.

To help support my definitive reasoning, allow David Helman, a staff writer for the Cowboys’ official site, to remind you that, just two years ago, the Cowboys won seven of eight games with Elliott rocking the long sleeves.

This "Zeke is fumbling because sleeves" stuff feels like some bad memory on y'all's part.

I dunno why he can't hold on to the ball. But I don't think it's that.

Fans are quick to theorize the wildest things to try and make sense of things, and this is clearly the latest absurd suggestion. Trust me, Ezekiel Elliott’s fumbling will stop when he stops getting loosey goosey with the football, not when he stops wearing long sleeves.