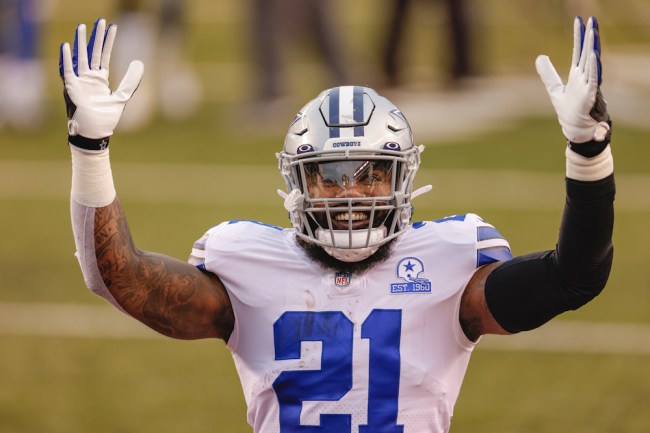 A few years ago, Ezekiel Elliott was (arguably) the best running back in the NFL. It might seem like an overstatement given how the past few seasons have gone for the Dallas Cowboys star, but between 2016 and 2018, Zeke led the league in rushing yards twice, proving he was a budding star.

Unfortunately, the 2020 NFL season was a major dud for Elliott, with the three-time Pro Bowler failing to hit the 1,000-yard plateau for the first time in his career. After playing 15 games and struggling with consistency, Zeke knew he had to do something to get stronger during the NFL offseason to prepare for the workload that’s bound to come his way in 2021.

Well, judging off the photo below, Ezekiel Elliott sure didn’t beat around the bush, because the guy looks like he’s lived in the weight room. Just look at how jacked the running back looks right now.

Here’s the thing about the Ezekiel Elliott picture: The guy doesn’t look bulky, but, instead, looks lean, mean and ready to be a yardage machine during the 2021 NFL season. He looks faster. He looks stronger. He looks determined to prove he’s still one of the best in the game.

For all those reasons, and probably more, it’s only natural to see Dallas Cowboys fans react excitedly to the photo of Elliott. Take a look at what some people had to share on Twitter about the player’s transformation.

@EzekielElliott letting yall know. The abs are back and the game will be too pic.twitter.com/k6iojM6R8r

After enduring some criticism for being either hefty or out of shape, it’s clear Ezekiel Elliott is trying to silence all his haters early and often this upcoming NFL season. Having already arrived at the Dallas Cowboys’ facility for training camp, fans of America’s Team are clearly hitching their buggies to the running back in the hopes of leading them to success this season.

Given the transformation he’s put himself through, it’s a safe bet to expect big things from the runner. Let this man eat all year long, Cowboys.