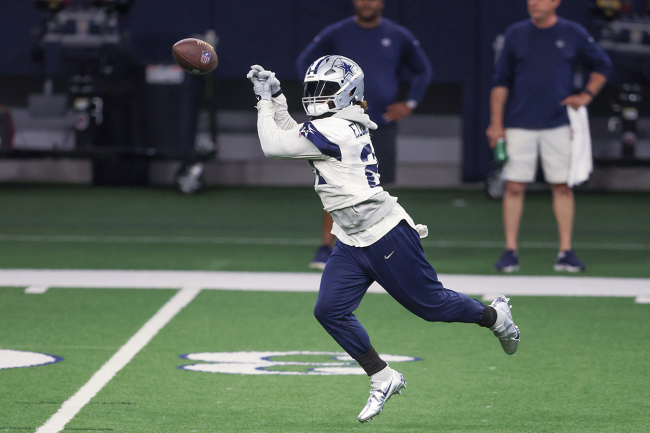 The Ezekiel Elliott revenge tour is underway. As the Cowboys running back looks to get back to form and take the next step toward a Super Bowl, it also comes with a new helmet.

Elliott is one of a few NFL players who chose to wear the new Riddell Axiom helmet this season. He wore it for the first time when he arrived at training camp earlier this month and explained the simple reason for choosing to do so.

The helmet, which is custom-fitted to the player’s head, is designed to increase player safety. It has a lot of new features that put the player first and are considered the most advanced, personalized football helmet on the market.

The Riddell Axiom looks like something from the future.

It also looks more like a race car helmet than a football helmet. Or something out of Power Rangers.

The biggest aspect of the helmet is the smart technology that is connected to Riddell’s new InSite Analytics software. The software allows teams to view head impact date on individual players and position group analysis.

Web-based, the analytics platform show as the quantity of team and individual head collisions increases or decreases on both a daily and weekly basis. It also includes charts that show the frequency of impact to specific locations, such as the back, front, left, right, or top of the head.

The technology is a huge breakthrough in the space and could see a significant increase in how head injuries and hits to the head are documented, treated, and perhaps most importantly, viewed.

Players are fitted for their helmets through Riddell’s Verifyt app. It scans thickness, shape and contour of an athlete’s head, and Riddell takes that date to add interior liner pads to the helmet that properly fit the athlete in terms of comfort and protection.

The helmet also includes flex system panels to improve impact response and a new facemask that is intended to better manage and respond to the energy of an impact. Riddell also installed a panoramic visor that strengthens the facemask structure and provides a better view of the field.

Elliott has something to prove in 2022.

After suffering an injury just four weeks into the 2021 season, Elliott played through a partially torn PCL in his knee. It was an injury that likely would have ended the season of most other running backs, but not the one in Dallas.

Elliott did not play up to his usual standard as a result. However, considering his injury status, it was impressive that he was on the field at all.

“I mean, I was hurt last year, but it’s football, after Week 1 no one is going to be 100%. That’s part of the game,” Elliott said at OTAs. “I think I knew I was tough, I think I knew I could play through injuries … it was definitely tough, but hey, it’s my job.”

And as he looks ahead to 2022, Elliott has a chip on his shoulder— but it’s no different than how he feels around this time every year.

“I think every year we’ve got something to prove,” Elliott said

Regardless of how well he plays, Elliott will likely be the first starting running back in the NFL to take the field wearing Riddell’s Axiom helmets come Week 1. Maybe the “new F-150” will help him return to form.