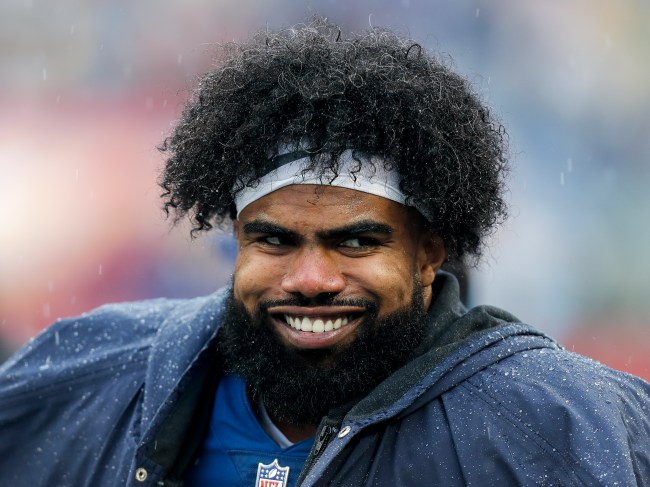 Ezekiel Elliott is one of the best running backs in the NFL, but, off the field, he can’t seem to keep himself out of trouble. While the Dallas Cowboys star has had a number of serious run-ins with the law over the past few years, the most recent incident wasn’t that serious, but it was another case where the 23-year-old Pro Bowler showed a serious lack of judgement — especially for someone as high-profile as he is.

While attending the Electric Daisy Carnival in Las Vegas on May 19, Ezekiel Elliott got in an altercation with security guards after they wouldn’t allow him to enter a restricted area. Rather than play it cool, Zeke got aggressive, with video showing the NFL player throwing a 19-year-old staffer over a metal gate and, ultimately, to the ground. While the victim, Kyle Johnson, said he wasn’t hurt, he added that “it didn’t feel good.” Take a look at video of the incident below.

Talking to the media following the incident with Ezekiel Elliott, Johnson told CBS 2 in Los Angeles that, while he’s still considering pressing charges, all he really wants from the Cowboys running back is a sincere apology. No, really, that’s it.

Johnson claims Zeke appeared drunk — “he didn’t really seem to have a clue about where he was” — and when they tried to direct him to leave the area, the Dallas Cowboys star got in his face and shoved him over a metal gate.

Cops asked Johnson if he wanted to press charges and at the time he declined because, “I didn’t want to make a rash decision that soon without evaluating it further. It was 3 AM. I was shocked.”

Johnson says all he wanted at the time was an apology from Elliott — a guy he used to look up to — but got a fake lip-service apology instead.

“I did get an apology from him, it wasn’t a sincere apology. He didn’t maintain eye contact. It didn’t seem sincere at all.”

Now, Johnson is evaluating all of his legal options — but says a “sincere apology” from Elliott would probably end the drama once and for all.

“I wasn’t hurt or anything but to have someone that you looked up to shove you on the ground over a metal fence? It’s not the biggest thing in the world … but [to say] nothing happened? I mean, come on.”

If it’s really that easy for Ezekiel Elliott to avoid any charges, he needs to take this and do whatever’s necessary to make things right with Kyle Johnson. Hell, throw in a few tickets to games and signed memorabilia, too, if that helps avoid more damage to his name.

Remember, Elliott was suspended six games by the NFL in 2017 after domestic incidents with his ex-girlfriend, and, while this incident is far less serious, Yahoo! Sports’ Charles Robinson reported that the league is “likely” looking into details, which could lead to more punishment.