Ezekiel Elliott Allegedly Tried To Fight A Vegas DJ ‘Cause, You Know, He Has Nothing To Lose Or Anything 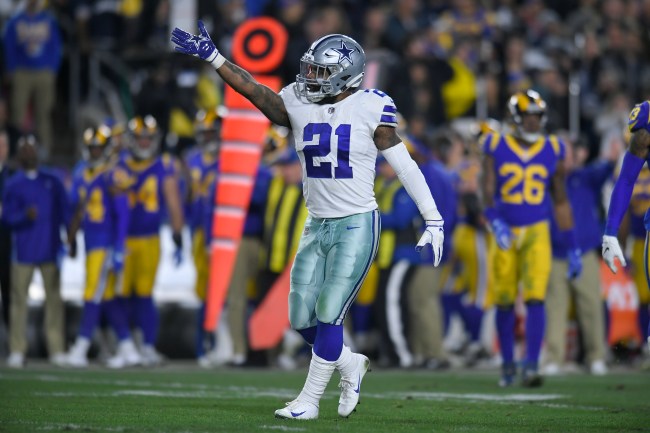 Ezekiel Elliott is one of the most talented running backs in the NFL, as he’s led the league in rushing in two of his first three seasons in the league. Problem is, the Dallas Cowboys young star just can’t seem to stay out of the news for all the wrong reasons, with the most recent incident coming in Las Vegas while enjoying some R&R time with some of his teammates.

You saw Zeke and Dak at Drais?

According to Sports Gossip, Zeke was seen at Drai’s Beachclub & Nightclub in Sin City over the weekend, with the running back buddying up with his quarterback, Dak Prescott, and a few of their offensive lineman. While that seems totally harmless, the DJ at Drai’s, DJ Franzen, alleges that Ezekiel Elliott tried fighting him, detailing some of the incident on his Instagram story by calling Elliott a “lil bitch” and then going in on him with the video below. Take a look.

Looks like DJ Franken is pretty pissed off about the whole thing, leading to Ezekiel Elliott no longer welcome back to Drai’s. Rightfully so, because, if this went down as he claims it did, the Cowboys running back will find himself in more trouble with the league office, with him already being suspended back in 2017 for an off-the-field incident, which came after question marks people had on him when Zeke came out of the Ohio State University in 2016.

Not sure what the hell is going on inside of Ezekiel Elliott’s head, but, given his talent on the football field, he could become one of the best backs of his generation. So let’s hope that he gets his sh*t together and starts acting like, you know, not such a d*ckhead whenever he’s not playing football, because, if he’s not careful, those dumbass decisions could lead to him looking for a career in something else.

There’s been no response from Elliott about this, so, hopefully, it was just an isolated thing that doesn’t become a regular theme of his offseason.