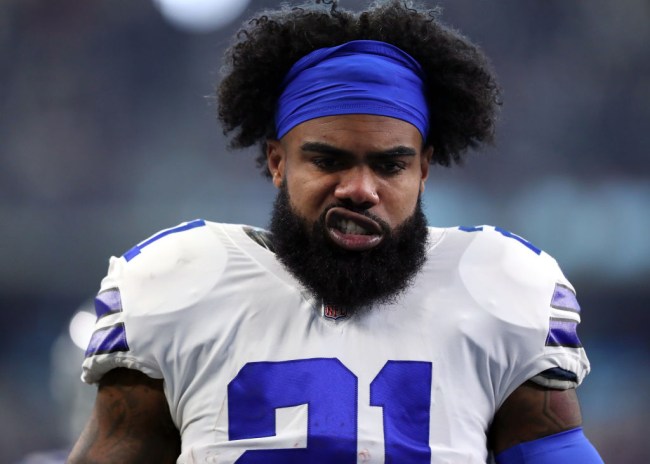 I don’t have the concrete stats to back this up but I’m willing to bet that Las Vegas comes close to topping the list when it comes to bad decisions made per capita, and over the past few months, Ezekiel Elliott has done what he can to contribute.

Back in January, the Cowboys running back kicked off the offseason by allegedly attempting to fight a DJ while getting his party on with a few of his teammates at a club on the Strip.

While no charges were filed, Elliott was banned from the venue and was on the receiving end of a rant from the man he supposedly went after.

Now, according to TMZ, it appears Elliott decided to get back into the altercation game over the weekend while attending the Electric Daisy Carnival music festival, where he was captured on camera shoving a security guard before being handcuffed by police.

In the video, Elliott—who was clad in a LeBron James Lakers jersey—can be seen arguing with his girlfriend before the duo were confronted by members of the event’s security staff—one of whom was eventually shoved to the ground by the player.

Elliott was placed in handcuffs following the altercation, and while he was detained, it doesn’t appear any charges have been filed at the time. His attorney released a statement following the incident condemning security for how they handled what he says was simply a couple’s argument and blasted them for overreacting.

It’s worth noting Elliott was suspended by the NFL for six games in 2017 stemming from domestic incidents with his ex-girlfriend, so while this situation may not have been as serious, it certainly isn’t the best look.

I doubt this will warrant another suspension, but when you consider he’s not a first-time offender, you never know.