A Fake Reporter’s Twitter Fooled CBS, And A March Madness Player’s Mom, When It Reported He Missed His Flight 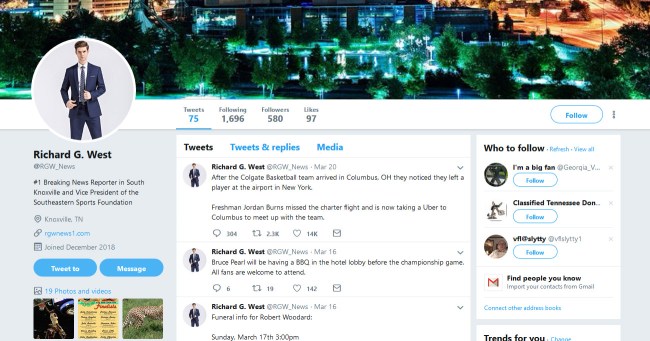 Fake social media accounts are nothing new in the world of sports. Heck, even some players use them.

As a result, there have been numerous occasions where the media and/or fans have been duped by a fake account into thinking that it’s real.

However, at least in those cases, the person on Twitter was actually pretending to be someone who, you know, reports actual sports news.

Unlike a report that several CBS affiliates believed this week when the Twitter account of fake news reporter “Richard G. West” broke the “story” of Colgate player Jordan Burns.

The account, which claims is for the #1 Breaking News Reporter in South Knoxville and Vice President of the Southeastern Sports Foundation, tweeted, “After the Colgate Basketball team arrived in Columbus, OH they noticed they left a player at the airport in New York. Freshman Jordan Burns missed the charter flight and is now taking a Uber to Columbus to meet up with the team.”

After the Colgate Basketball team arrived in Columbus, OH they noticed they left a player at the airport in New York.

Freshman Jordan Burns missed the charter flight and is now taking a Uber to Columbus to meet up with the team.

Awful Announcing reports that the tweet was picked up by no less than CBS New York, CBS Philadelphia, and CBS Pittsburgh.

(CBS New York/CBS Local) — Colgate sophomore guard Jordan Burns made it to the the airport for the team’s charter flight to its first-round NCAA Tournament game. But he didn’t make it onto the plane. And the team didn’t notice until they landed.

So now the sophomore guard is taking an Uber from Hamilton, New York to Columbus, Ohio, where his 15th-seeded Raiders will take on the second-seeded Tennessee Volunteers. The 512-mile trip, under normal driving conditions, should take about eight hours. The game is scheduled for Friday, March 22 at 2:45 ET.

Burns is a key part of a Colgate team hoping for an upset and a little more March madness. He’s averaging 15.8 points and 5.8 assists per game this season. Colgate won the Patriot League tournament, securing their place in the South Region of…

Hold up. How did they know that he made it to the airport? Nowhere in the tweet was that mentioned. Hmmmmm…

Even Burns’ mom thought the story might be real, reports Mike Wilson of the real Knoxville News-Sentinel…

Colgate guard Jordan Burns was in Ohio on Wednesday just as he was supposed to be.

Then his mom called.

“She was like, ‘Wow, I know if you would have missed this flight I know you would have picked up the phone and called me, right?’” Burns said Thursday. “I was, like, ‘Yeah, Mom, I’m in the hotel and things like that.'”

“I had a lot of little messages like, ‘Did you not make it?’ Like, ‘Wow, they left you? Really? Like, that’s crazy. After everything you’ve done,’” Burns added. “People are telling me all this stuff. It’s funny. But it’s just a fake tweet. It’s really hysterical.”

No, what’s hysterical is that any legitimate news outlet would believe that tweet to begin with when you take a look at some of Richard G. West’s other “breaking news.”

Bruce Pearl will be having a BBQ in the hotel lobby before the championship game. All fans are welcome to attend.

In lieu of flowers please donate to the the Starkville Pee-Wee Boys Basketball team.

The Kentucky basketball team are in a bit of a panic mode this morning as the managers were washing their game uniforms the machine caught fire and ruined every pair.

Kentucky may be playing tonight in their practice jerseys.

He will serve as an associate Athletics Director to the school’s programs.

He will also be introduced during the Texas A&M / Tennessee basketball game tonight.

More bad news for the Kentucky Basketball team as their bus broke down on I-75 heading home.

Calipari was reportedly seen yelling on the side of the road at a tree.

Okay, I kind of do believe that last one.