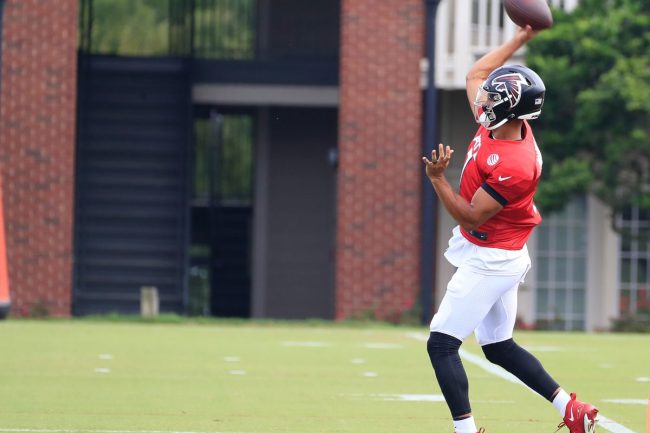 Fans don’t believe the Falcons can compete for any division titles this season after seeing the preseason depth chart. Let’s just say you won’t be rushing to pick many Atlanta players for your fantasy football teams.

The team dropped its lineup on Tuesday in the midst of the training camp period, and there aren’t a lot of names that will jump off the page.

At quarterback, you’ve got Marcus Mariota starting over rookie Desmond Ridder and Felipe Franks. Most of the rookies are positioned near the bottom of the chart. Kyle Pitts and Cordarelle Patterson should be dynamic playmakers at the skill positions, but overall, there’s not a ton to be excited about.

Atlanta is coming off of a 7-10 campaign, its fourth straight losing season. They traded away Matt Ryan this offseason, maybe the greatest quarterback in the history of the organization, and will now attempt to build around Mariota, who hasn’t started a game in two years.

Also gone on offense are Mike Davis and Calvin Ridley, who’s serving a suspension for gambling. Players might be doing their best to get him back on the field, but they likely have no say in the year-long ban.

Much is unknown and unproven on the Atlanta roster. Fans don’t think that bodes well for the 2022 season.

There’s not much positivity surrounding the Falcons’ preseason depth chart. Take a look at the immediate reaction on social media.

Is this a joke

At least some fans are looking on the bright side. A rough year will only improve draft positioning in 2023.

With the Falcons battling it out in the NFC South with the Bucs and Saints, they’ll likely wind up near the bottom of the division. Atlanta fans could be in for a rough season in 2022.