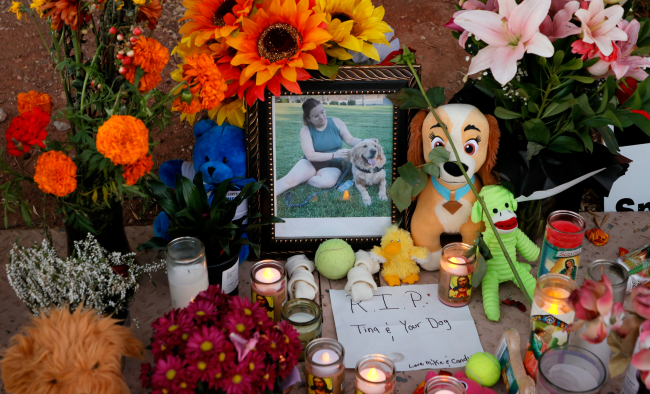 The family of Tina Tintor issued a statement Thursday night expressing the immense amount of grief they are experiencing.

“Tina’s tragic loss has devastated her family beyond a grief they could ever comprehend,” the statement read. “Family was everything to Tina, and she was the light of her parents’ life. Tina lived in Las Vegas since she was a baby. She loved her 3-year-old Golden Retriever, Max, who passed alongside her Tuesday morning.

“The Tintor family appreciates privacy as they mourn. May Tina rest in peace.

“No further statements will be made from the family at this time.”

One of the bystanders who attempted to rescue Tintor was former law enforcement officer, Alexander Hart, a deputy chief security guard for Northstar Defense Corporation.

Eli Hill, president of Northstar Defense Corporation, issued a statement on his behalf on Thursday, reports the Las Vegas Review-Journal.

Hart was patrolling a nearby condominium complex when the Corvette sped by on Rainbow Boulevard, catching Hart’s attention. Seconds later, according to the statement, Hart heard the screeching of tires followed by “a loud collision.”

The security guard immediately jumped into his vehicle “to locate the source of the sound.” Soon, the fiery crash came into view, and he radioed to Northstar Defense dispatch center, requesting police, the fire department and medical personnel.

“Deputy Chief Hart attempted to get the victim out of the vehicle but was unable to due to rapidly accelerating fire and smoke,” the statement reads.

After backing away from the flames, Hart ran to the Corvette and offered Ruggs and his girlfriend assistance until first responders arrived.

“We are not surprised by the actions of Deputy Chief Hart,” the statement concluded. “Deputy Chief Hart is a former law enforcement officer and helping others is just the type of man he is.”

As of Thursday, Hill told the Review-Journal, Hart “was doing as well as one would given what he experienced. He is a good man and a trooper.“

Newly released surveillance video obtained by TMZ Sports shows Henry Ruggs speeding in his Corvette about a block away from where the deadly crash occurred. Police reported Ruggs, whose blood alcohol content was more than twice the legal limit, was going 127 MPH when he smashed into Tintor’s Toyota RAV4.

The judge in Henry Ruggs’ case told the former Raider, “I cannot recall a speed that high in my career on the bench.”

The 22-year-old Ruggs has been charged with DUI resulting in death and reckless driving and faces up to 46 years in prison.