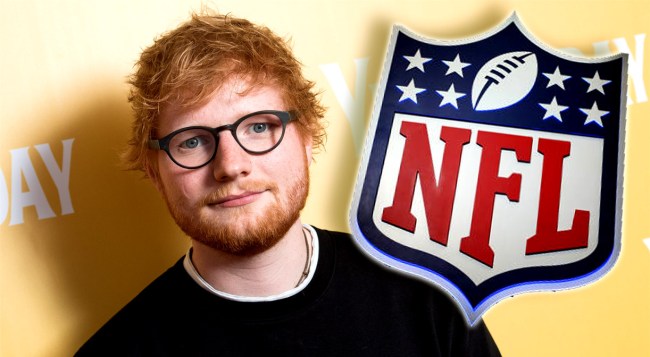 Are you ready for some football?!!! Because the party gets started Thursday night with the first game of the 2021 NFL season. The defending Super Bowl champion Tampa Bay Buccaneers with Tom Brady, Leonard Fournette and Mike Evans will face off against the Dallas Cowboys with Dak Prescott, Amari Cooper, and Ezekiel Elliot.

Related: Amari Cooper Claims To Be The NFL’s Best Wide Receiver, But That Simply Isn’t True

As usual, the NFL is pulling out all the stops with its opening night Kickoff Concert which in the past has featured very football-centric acts such as … ummm, Train, and… Guster?

No matter… this year’s NFL Kickoff Concert is the perfect pairing of smashmouth football and music as the league very proudly reminded everyone on Tuesday that Ed Sheeran will be performing.

Wait… what? That was pretty much the reaction of every NFL fan who just became privy to this bit of news on social media. Bonus points to the NFL for making the announcement with a graphic that one person noted has “Brady’s cheek and chin implants looking nice.”

Because when I think of music that embodies the adrenaline-filled, rough-and-tumble nature of professional football, I think of ol' Eddie Sheeran singin' straight to the ladies' hearts.

This is a VERY confusing picture

Every time you post this I think it’s a parody. It’s actually way more hilarious that you are serious

This just… no. I’ve liked Ed Sheeran’s stuff, but he does NOT belong in anything associated with NFL. Terrible selection here

This graphic looks like a Harry Potter spinoff about Ron Weasley where he has to get the help of professional athletes. Won’t even release to a streaming service and will appear on a companies website

Even British NFL fans were like, really? Ed Sheeran?

Ed should really get the crowd fired up, can’t wait. Yes I’m talking shite, what a strange choice, and I’m English.

Remember when this was the song most people associated with the NFL?

Why, yes, that is Wolfman Jack at the beginning of the video. The NFL needs more Wolfman Jack references, don’t you think?

Actually, let’s just use this song for all NFL telecasts from now on, okay?

Wait, no, this one is all we need.

But yeah, Ed Sheeran’s cool too.

Partnering throughout the 2021-22 @ESPNNFL season to choose tracks that reflect the energy, intensity & storylines of select #MNF game matchups