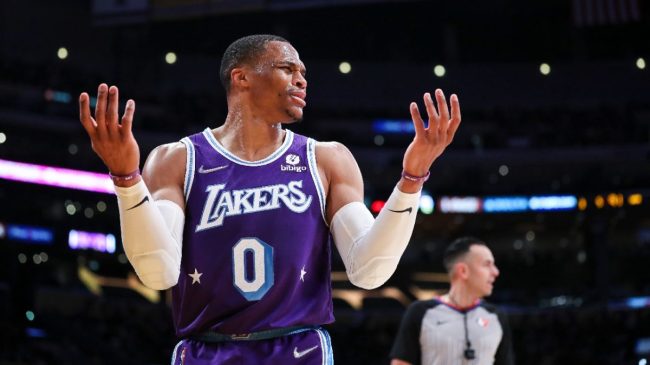 It’s not news that Lakers guard Russell Westbrook has been struggling in the 2021-22 campaign. His team is currently seven games under .500 and their NBA Playoff hopes are certainly in question.

Entering the year, the so-called “Big Three” was supposed to be the group to lead Los Angeles back to the promised land. Unfortunately, they’ve done anything but.

Anthony Davis has missed as much time as he’s played. Carmelo Anthony is scoring less than 14 points a contest. Dwight Howard is a shell of his former self.

LeBron can’t do it all.

With James’s supporting cast struggling to help him out, fans have singled out guard Russell Westbrook as the scapegoat for the Lakers’ poor performance.

The former NBA MVP is averaging 18 points a night, but he’s too often seen turning the ball over or clanking shots off the back of the iron (or the side of the backboard).

With Davis out and Westbrook being the only other legitimate scoring threat, he makes an easy target. But his commentary off the court doesn’t make things better.

After LA’s 28-point loss to the Pelicans over the weekend, Westbrook failed to take any responsibility for his team-leading seven turnovers. Instead, he just said the Lakers simply need to “play harder.”

Fans Went Off On The Struggling Star, Giving Descriptions Of Westbrook In Five Words Or Less

This came following a loss to Dallas where the point guard shot just 5-of-17 from the floor.

The answers, as you could expect, aren’t pretty.

He used to be good

We could’ve had Derozan

Westbrook has just a couple of weeks to redeem himself and help get the Lakers to the postseason.