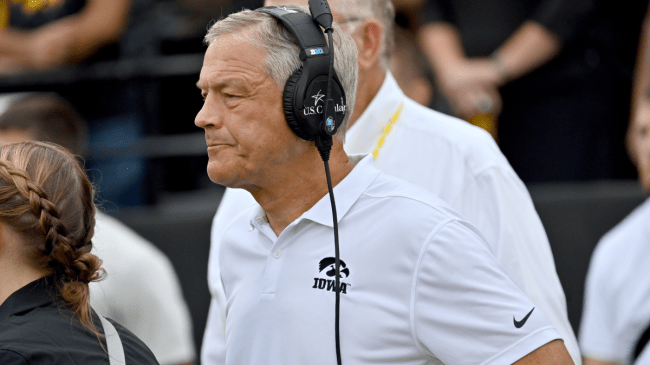 The numbers for the Iowa offense this season have been bad. Historically bad. Saying that they’ve been unable to consistently move the ball would be a massive understatement.

In their first game versus FCS program South Dakota State, the Hawkeyes somehow scored seven points without getting into the endzone. They won the game 7-3 with a field goal and two safeties.

The Hawkeyes then fell in Week 2 to archrival Iowa State by a score of 10-7. While they were able to finally find the endzone, the performance was… lacking.

Despite the slow start, head coach Kirk Ferentz is sticking with his starting quarterback, which led to a hilarious string of Cameo pranks involving notable college coaches. Even Iowa basketball coach Fran McCaffery was duped in the hijinks.

But while Hawkeyes fans aren’t confident in their offense’s ability to score, it seems the Vegas sportsbooks are. In fact, they’re banking on the unit to improve exponentially.

Iowa is favored by 23 points on the spread for its upcoming matchup against Nevada. Fans have been quick to react.

Nevada has been bad, giving up 55 points in a loss to Incarnate Word last weekend. But Vegas is putting a lot of stock in Iowa being able to exploit that Wolfpack defense after scoring just 14 points in the first two games, combined.

The spread is more than 3x the number of touchdowns that the Hawkeyes have scored this season. Iowa has found the endzone once this year, which begs the question, ‘How will they possibly cover?’

Luckily a few college football fans are offering their suggestions.

Now, a typical 23-point spread would be covered by three touchdowns and a field goal. There’s also the possible two TDs and three field goals that would get you a ‘push.’

But seeing that the Hawkeyes have more punts than points this year, these fans are getting creative with their possibilities.

One fan suggested, “Iowa favored by 23 over Nevada. That’s 10 safeties and a FG…”

Considering the Hawkeyes have tallied more safeties than touchdowns so far this season, that’s not a bad guess. A number of followers jumped into the replies to give their best predictions.

This fan said, “I did see an NFL game where 21 points came by field goals.” Maybe the Hawkeyes can add another to get the total to 24 points.

But the best response involves the elusive one-point safety, which has been seen just twice in NCAA DI history. The response said, “Or 11 safeties and a 1-pt safety on the point after attempt”

That might be rare, but if anyone can pull it off, it would be this year’s Iowa squad. They’ve found each and every way to get points on the scoreboard thus far. Why not add one more to the collection?

We’ll see if Iowa is able to cover that seemingly massive spread on Saturday against Nevada.