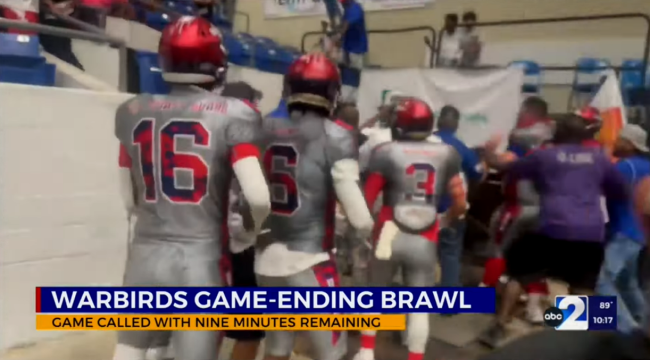 A chaotic scene erupted near the end of the West Texas Warbirds indoor football game versus the Dallas Prime when a brawl broke out between the teams with fans getting involved.

With eight minutes left in the fourth quarter of the game between the Warbirds and the Prime on Saturday night, players from both teams began fighting.

The fight between the players, in which coaches were also involved, eventually spilled into the stands with one fan even hitting a Dallas Prime player in the helmet with a metal chair during the approximately 10 minute melee.

SHOCKING: An ugly scene tonight as a brawl broke out between the West Texas Warbirds and the Dallas Prime at the end of their indoor football game.

In this video you can see players going into the stands and fighting with fans.

It is unknown if anyone was injured or arrested. pic.twitter.com/C0VWeWj2rR

Following the brawl, the rest of the game, which was being held at Ector County Coliseum in Odessa, Texas, was canceled with the Warbirds holding a 50 to 6 lead and getting the win.

The Ector County Sheriff’s Office says it has identified every participant and every injured party and will be reaching out to them to obtain statements.

“No arrests were made last night. Our main goal was to get everyone broken up and dispersed,” said Ector County Sheriff Mike Griffis. “We’re going to be collecting all of the videos. I imagine it will be a somewhat lengthy process to get everything substantiated and corroborated.”

The Sheriff also added, “The Dallas team got their butt spanked and tempers flared.”

On Sunday, the West Texas Warbirds held a press conference to address the fight

“What happened at the conclusion of last night’s game was embarrassing, regrettable and inexcusable” said Warbirds president Leif Kurtis. “Regardless of anything that was said on the floor, we do want to apologize to the people of Odessa for what they witnessed last night, and to the people of the Permian Basin as well. This incident is not indicative of how our organization operates. We are confident though, that after all the appropriate investigations are completed, details will be better known.”

Ector County Coliseum director Aaron Martin said in a statement about the fight during the Warbirds game, “We are shocked and appalled by the incident that occurred at the conclusion of the Warbirds football game Saturday night. While no arrests were made, all those involved have been identified by law enforcement and the incident is under investigation. We will be meeting with Warbirds staff and our local sheriff’s office to discuss football operations and security procedures to analyze and assess any changes in protocols or security procedures that may need to be implemented in the future. The safety of all those in attendance continues to be our top priority.”

With the win Saturday night, the Warbirds, a member of Arena Football Association, took home their second straight Lone Star championship, going undefeated for the second year in a row.