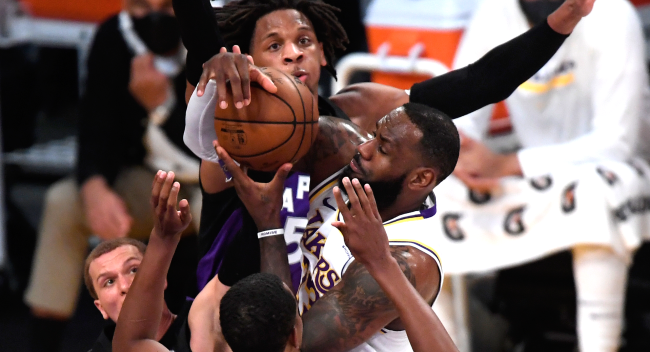 Since the Los Angeles Lakers found themselves in the midst of the hilarious “Vivian Flores” catfishing fiasco, the team has gone 1-6 with losses to the Wizards, Kings, Mavericks (twice), Jazz, and Raptors and fallen into a tie for the seventh seed in the West.

On top of that, LeBron James is continuing to deal with a bad ankle and now their point guard Dennis Schröder will miss at least 10 to 14 days for violating the NBA’s health and safety (COVID-19) protocols meaning he could miss the rest of the regular season.

“Our team is predicated on health,” said James after the news about Schröder hit. “That is the number one thing for our ball club. We’re a team that we need to be healthy, and we need to be full. And if it’s not one thing, it’s the other. And then we show up today and the starting point guard is not in the lineup. So it’s like another blow for us.”

In case you missed the whole catfishing episode, it centers around a supposed Los Angeles Lakers fan and podcaster named Vivian Flores, AKA Butterfly_424, who supposedly “went missing” and is “battling leukemia” then “reappeared” claiming she is a real person even though many of her social media photos are glaringly obvious bad Photoshops using someone else’s face.

The stolen face used by the catfish is model Sharon Alexie pic.twitter.com/UKgmGQJFa6

So… she’s not real, yet the Lakers were reportedly very worried about her safety. Here’s a complete explainer because the entire story is so long and ridiculous.

All that is to explain why NBA fans are tripping all over themselves to make jokes at the Lakers’ expense and invoking the name Vivian Flores as much as possible, claiming the made up Lakers fan has put a curse on the team, causing their recent slide in the standings.

The Lakers are 1-6 since Vivian went missing.

Turns out they went missing too. pic.twitter.com/VGUaPM0HNq

Lakers in must-win territory and have lost 6 of 7. I blame Vivian.

It would appear Vivian was the glue holding the lakers together.

The Lakers are 1-6 since the team stayed up late trying to help #LakeShow Twitter find @LAKERFANATICS's own Vivian. They lost to the Jazz and their rhythm has been off since then.

It's crazy how something so stupid affected the team so much to wrap up the season. pic.twitter.com/Fwk9MSDl3F

Vivian if you are reading this, please come back and save the Lakers. We are begging you. #LakeShow

Dudley and Vivian being the reason for the Lakers meltdown. 2021 is built different

Vivian put a curse on the Lakers 😭

Lakers about to be eliminated when Vivian emerges from the tunnel Willis Reed style - make it happen @josh2saint https://t.co/ZCFtG1sVKU

That really needs to happen.