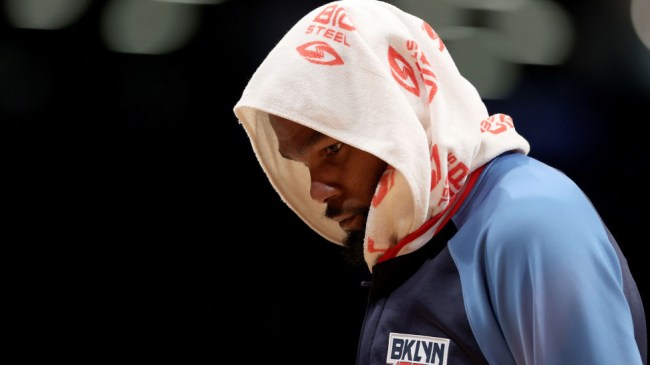 The Brooklyn Nets took on the New Orleans Pelicans last night, with the Nets coming away with a 120-105 victory. While Brooklyn landed the win, they unfortunately suffered the loss of their top player in the process.

Kevin Durant went down in the second quarter of action on Saturday when a teammate fell into the superstar’s lower body. In the replays, you can clearly see Durant’s knee buckle, and now the team’s fears of a lengthy recovery process have been confirmed.

Nets are optimistic Durant can return to the court in 4-6 weeks, per @wojespn https://t.co/d1gI0M3yTQ

Durant had been leading the league in scoring at over 29 points per game. He’s been a favorite to land the MVP honor at the end of the regular season after helping lead the Nets to a 27-15 overall record, good for the second-best mark in the Eastern Conference standings.

Now, those MVP hopes could be dashed, as well as aspirations for a possible NBA title. Fans took to Twitter to discuss the possible championship repercussions on Brooklyn’s season.

That does it for the Nets' Championship aspirations. https://t.co/EIyrAYiZiG

he will come back to meet the team at the 5th seed https://t.co/eRQpqQYH0O

With their best star out of the lineup, the Nets certainly fall from that top tier of the Eastern Conference. Unfortunately, it’s an issue that the organization has had to deal with in the past. Durant missed his first season in New York due to an Achilles injury. He missed extended time again last year while nursing a hamstring pull.

Even prior to joining the Nets, Durant’s history of injury was extensive. Bad luck with the injury bug has certainly stunted his All-Star career. Fans are hopeful that the MVP candidate can make a safe return to the court sooner rather than later. Optimists are hoping for a four-to-six-week rehabilitation period.

Got Damn. My Guy KD Can’t Catch A Break. He Is Definitely My MVP Pick So Far This Year. Get Well Soon‼️‼️‼️ The NBA Need U https://t.co/Nv5uNdSCM6

the mvp is really in steph’s hands now.
it’s his choice if he wants to keep sleeping. https://t.co/heHXfA47oz

The Nets are hopeful he’ll be back by the time the All-Star break rolls around. It will be interesting to keep track of Brooklyn’s performance with Durant out of the lineup.