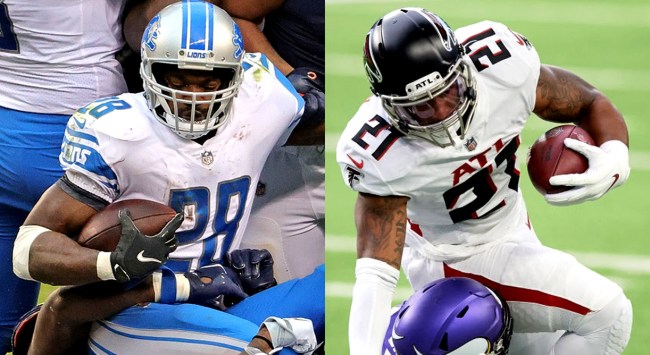 Full disclosure before this report: I am a diehard Tennessee Titans fan. Yes, we do exist. On top of that, but much less important, I also have Derrick Henry on my fantasy football team. So the news that the star running back will miss six to 10 weeks after undergoing surgery on his injured foot was not what I wanted to learn on a Monday morning.

Do you know what else I really didn’t need to find out on a Monday morning? That the Tennessee Titans were reportedly bringing in Adrian Peterson for a workout and may even have interest in signing Todd Gurley as a replacement for Derrick Henry while he is on the shelf.

Mike Vrabel said Derrick Henry will have surgery on his foot Tuesday morning. No timetable for his return. Vrabel anticipates offense changing some without Henry and hints toward a multi-back system behind one of them.

36-year-old Adrian Peterson, one of the greatest running backs in NFL history, was last seen rushing for 604 yards on 156 carries for the Detroit Lions in 2020.

So to say things are looking bleak for the Titans and their rushing game right now would be a serious understatement.

A look at the Titans' running back depth chart behind Derrick Henry:

Reactions to the rumors that Tennessee was considering either Adrian Peterson and/or Todd Gurley by NFL fans are also something I didn’t need to see on a Monday morning. But I did. So I share.

The #Titans are expected to work out veteran RB Adrian Peterson this week, sources say, in the wake of the Derrick Henry foot injury. Tennessee could replace the MVP candidate with one of the greatest running backs of all time.

That's like saying the Titans are expected to work out Jim Brown, one of the greatest running backs of all time.

Why are the Tennessee Titans pursuing AP over Todd Gurley?

My 80 year old father has better knees than Gurley

OJ was at the #Bills game yesterday. He looked in good shape for 74. I hear he is available.

Why not just sign Frank Gore or Alfred Morris while we’re at it.

Peterson initially is signing to the Titans’ practice squad with the expectation he will be added to active roster. pic.twitter.com/8ByfZyS5Mq