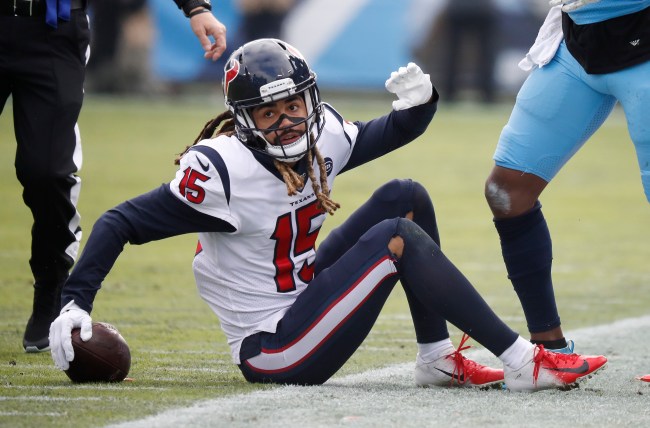 Here it is. You made it. This is for the championship. You’re going to look at your lineup a lot, comb through the wire, second guess every decision. Don’t forget, you made it this far, your team doesn’t suck, we just have to make sure it sucks less than your opponent this week.

I got you, let me guide you through this week and tell you who should start and sit for Week 16.

Remember to set your lineups a day early, there are Saturday games.

Quarterbacks To Start This Week

Oh, is Winston down both his top receivers? You wouldn’t notice with the stats he’s been putting up. He has 912 passing yards and eight touchdowns in his last two games.

He gets a prime matchup this week against a Houston secondary that has allowed opposing quarterbacks to pass for 30 touchdowns this year and multiple touchdowns in four of their last five games.

I have Tannehill as the featured image on my playoff preview, of course I have to list him. We must ride the Tanne-thrill all the way through the season.

The Saints have allowed 250 passing yards and multiple touchdowns to four of their last five opposing quarterbacks, including three consecutive on the road.

Sleeper Quarterback Of The Week

We’ve talked about the ageless wonders of Adrian Peterson and Frank Gore this year, but what about the 37-year-old Fitzmagic? He has been on fire lately with eight total touchdowns in his last four games and 20+ fantasy points in three of his last four.

He goes against the Bengals, who are allowing 20 points to fantasy quarterbacks this year and the most rushing yards. Fitzpatrick’s 219 rushing yards lead the Dolphins; this would set a record for the least amount of rushing yards to lead a team in the Super Bowl era.

Quarterbacks To Sit This Week

I’ve established this before, but I’ll reiterate, Jared Goff is a matchup based quarterback. Last week, all of his damage was done in garbage time, but overall the offense looked stale.

The last time Goff went against this defense, he only managed to throw 78 passing yards. Add that he’s dealing with a thumb issue, I’m staying away.

It feels like forever when the Mayfield went into Baltimore and defeated the Ravens in week 4. Since then, these teams have gone in completely different directions; for one, Baltimore has not lost since, and well…come get me, and I’ll tell you how the Browns are doing.

The Ravens are allowing the second-fewest fantasy points to quarterbacks in their last four games.

Allen has started to fade over the last couple of weeks, averaging just 14.1 fantasy points over the previous two games, he ranks as QB26 in that time frame.

He runs into the buzzsaw that is the Patriots defense. They are allowing only 190 passing yards-per-game, the lowest touchdown percentage-per-pass attempt, lowest QB rating, and under 10 fantasy points.

Running Backs To Start This Week

Sanders has done really well since Jordan Howard’s injury. Doug Peterson has never been a fan of having a ‘featured running back,’ but he has 20+ touches in three consecutive games.

With him effective in both the running and passing game, he has a very high ceiling.

Mack has struggled since returning from his hand injury; in matchups against the Buccaneers and Saints, who are allowing the third and fourth-fewest amount of fantasy points to running backs.

This week he gets the Panthers who are allowing the most points to running backs, including 25 to Chris Carson last week.

The Redskins want to run the ball. Adrian Peterson has 36 carries since Derrius Guice’s injury, the volume alone makes him a sure play this week. He also has a rushing touchdown in three consecutive games and he has an excellent chance to make it four.

Running Backs To Sit This Week

Hyde saw a ton of work with his first 20+ carry game since Week 6; he finished with 104 yards and a touchdown.

This week he runs into a bad matchup as the Bucs are allowing an NFL lowest 73.3 rushing-yards-per-game and have only one 50+ yard rusher in their last six games.

With how bad the Bucs are against the pass and the Texans’ ability to move the ball through the air, the possible game script does not help Hyde.

Hunt has played well since his return from suspension with double digits points in five of six games. One of the reasons for his success is his ability to be a part of the passing game.

The Ravens are allowing the third-fewest receiving yards-per-game to running backs and only one touchdown. This could hinder his use this week.

His use has steadily risen and could firmly say he’s the lead back in Buffalo. He’s going to be an outstanding player in years to come.

For this week, he’s a tough start against the Patriots who have allowed the second-fewest rushing touchdowns and the lowest amount of fantasy points.

Wide Receivers To Start This Week

Gallup put up an absolute dud last week against Los Angeles, but do not get nervous this week. The Eagles are second-worst in terms of points-per-game to wide receivers and allowed Terry McLaurin to have 133 receiving yards and a score last week.

Speaking of McLaurin, we saw the return of Scary Terry last week with that performance against the Eagles.

The Giants are awful against the passing game and are allowing the third-most fantasy points to wide receivers this season.

Besides that one explosive game of 217 receiving yards and three touchdowns, Fuller has been a bust.

If you’re in need of a flex start this week, Fuller has the potential to put some numbers in a game where the ball is going to fly, and passing yards will come in abundance.

Wide Receivers To Sit This Week

It’s championship week, we need to make sure we have the right lineup set, and anyone on the Rams not named Tyler Higbee should be benched.

This Rams’ offense is nowhere near matchup-proof and has struggled against tougher defenses. They are 0-3 against a defense that is tenth or better in terms of points-per-game to wide receivers, with only one wide receiver having over 60 receiver yards in those games.

You can hope for garbage time points like last week, but do you want to do that in the championship?

I’ll let fantasy football expert and future brewery buddy Field Yates tell you why not to start Brown this week.

Patriots CB Stephon Gilmore is tied for the NFL lead with 6 INT, returning 2 for a TD. He’s been the closest defender on 84 targets and ZERO have gone for a TD, per @NextGenStats, the most targets without allowing a TD of any player in the NFL. A total lockdown corner.

Tight Ends To Start This Week

The inability of the Cardinals to defend tight ends is well documented. Hollister’s production has dipped in recent weeks, but this is a matchup you can’t ignore.

Fant had a rough game last week coming off the big performance the week before. He has an excellent opportunity to bounce back against the Lions, who’s defense has regressed significantly over the last few weeks.

Tight End Sleeper Of The Week

You bet I’m going with Dallas against Dallas. Even with Zach Ertz, Goedert is fantasy relevant, at least when it comes to tight ends.

The Cowboys are allowing the third-most receptions to tight ends this year, and with the Eagles depleted at wide receiver in what is the biggest game of the season, he will surely see a lot of opportunities.

Tight Ends Sits Of The Week

Doyle has not run with the lead tight end job like it was expected. Unfortunately, he gets a tough matchup against the Panthers who are allowing under six points-per-game to tight ends this year.

I didn’t have Seals-Jones listed in my waiver wire because I feel like starting him this week is too risky. Last week he faced that bad Cardinals defense, and it was revenge game. The Ravens are allowing the fewest fantasy points to tight ends this season.

Although on paper this is a good matchup, Rudolph and the Vikings passing game has regressed into its old self. Minnesota has the second-highest running play percentage over its last three games, and Rudolph has seen just five targets over the previous two. With the return of Thielen, Rudolph will see his production drop.