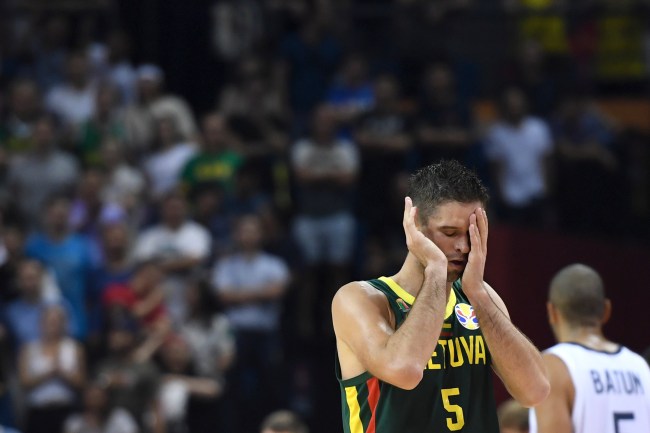 Lithuania got so boned that FIBA powers-that-be relieved the referees responsible for the boning of their duties in the World Cup going forward.

Lithuania was down by two with 30 seconds remaining when Lithuanian Jonas Valanciunas was fouled, sending him to the line for a pair of free throws. He converted on the first, cutting the lead to one, and while his second free throw was rattling around the cylinder, France center Rudy Gobert made clear contact with the rim before swatting the ball away. It should be noted that FIBA allows basket interference with balls above the cylinder, but as you can clearly see below, this was not one of those instances.

The officiating crew, for some inexplicable reason, did not utilize video review, and France went on to hit a game-sealing jumper to win 78-75 and clinch a quarterfinal berth while eliminating Lithuania from the World Cup.

“This is fucking joke. This is not basketball. This is not system. For what they have this VAR system? You don’t need to be smart, you need to be honest. Stop the game, go to watch what’s happened in the game. These guys, they spent all summer, two months without families. They receive zero dollars, Euros. Biggest respect for them. But somebody don’t respect this game. This is a fucking joke!”

FIBA then released a statement agreeing that Lithuania got boned and announced referees Antonio Conde, Daniel Garcia Nieves, and Leandro Lezcano–who have a combined 27 years of experience at the FIBA level–would not officiate any more games of the 2019 World Cup.

Thoughts and prayers go out to Lithuania during this difficult time.