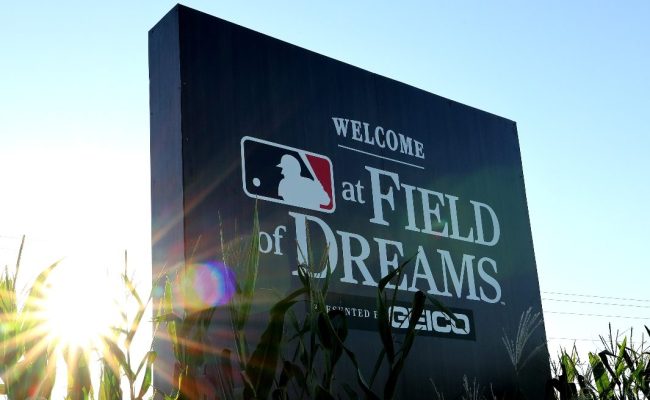 After the MLB played a baseball game in a replica of the Field of Dreams, fans everywhere couldn’t help but feel overjoyed watching the game. It drew a huge crowd and the field is still used for some minor league and high school games. However, Iowa Governor Kim Reynolds has made a decision to make a Field of Dreams stadium permanent, and fans are completely torn about it.

Field Of Dreams Stadium Gets $50 Million Of Total Funding

According to Front Office Sports, Reynolds okayed $12.5 million in state funding to build a permanent ballpark right at the movie site. Overall, the stadium will have a total of $50 million of funding to build the unique stadium. It will be used for future baseball games at the professional, college, and high school levels. Additionally, the Field of Dreams stadium will be used for camps, concerts, festivals, and other venues.

Iowa Gov. Kim Reynolds has approved $12.5 million in state funding for a proposed, permanent ballpark at the Field of Dreams site.

Baseball Fans Completely Torn About The Stadium’s Concept And Design

This Field of Dreams stadium is getting a ton of mixed reviews. Some are absolutely loving it while others hate the idea. Many are hopeful the corn field will still be present. Others believe the stadium design removes the spectacle of the field in general.

Not Field of Dreams any more then.

A great idea this is.

The allure of it is a baseball field in the midst of fields of corn. This ruins that. https://t.co/Sl26NbkHTs

Clearly, both sides are split. Some baseball fans simply love the idea for what it is. However, those criticizing the stadium plans do make some fair points. Which side of the argument are you on?