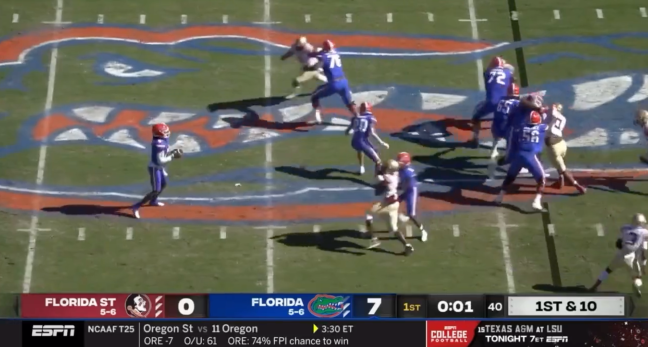 With four seconds remaining in the first quarter, the Gators held a seven-point lead and the momentum. On 1st-and-10 inside Seminoles territory, Jones took the snap out of the pistol formation.

After getting the ball and handing it off to his running back, the running back pitched it back to Jones. A flea flicker was in play.

Well, all by himself in the backfield, Jones had all kind of time but nobody open downfield. In turn, he saw the pocket collapse, stepped up with a defender closing in and threw the ball down field.

He had a receiver coming across the middle of the field in between two Florida State defenders. Jones did not split them.

Instead of hitting his receiver for a big gain and a first down, Jones threw the ball directly into the arms of defensive back Jammie Robinson. Robinson took the interception back to the original line of scrimmage.

Jones, a junior has been in and out of the starting role all season, made a truly horrendous throw. It was not even close. The ball was thrown directly to the defender.

The winner of Saturday’s Sunshine State Showdown not only holds bragging rights until the two teams meet again, but will also reach bowl eligibility while the other will not. Regardless of the result, Jones’ flea flicker interception will forever live in infamy.