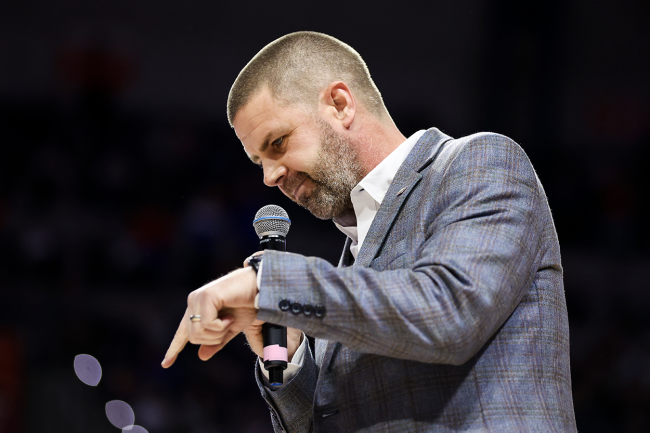 Over the course of the last few years, turnover and touchdown props have been at the forefront of college football. The Miami Hurricanes kicked things off with the legendary ‘Turnover Chain’ and quite a few other schools followed suit.

Among them, Florida State broke out the ‘Turnover Backpack,’ Ole Miss briefly had the ‘Turnover Moneybag,’ Pittsburgh showed off its sideline dunk celebration and Coastal Carolina debuted the turnover cloak and sword. There are countless others, but Miami was the first.

Now, as Florida gets ready for the 2022 season, new head coach Billy Napier wants to be very clear that his program is not going to partake in all of the shenanigans. He is not interested in any sort of turnover prop and he wants nothing to do with his in-state counterparts.

Over the weekend, as the Gators took the field for their annual spring game, they celebrated on both sides of the ball with a prop of their own. It was first debuted as a ‘Touchdown Chain.’

The Florida Gators appear to be embracing a touchdown chain this year. pic.twitter.com/DyhpdIKODg

And then the same chain was used as a ‘Turnover Chain’ later in the afternoon.

Looks like @GatorsFB forgot to ask the last Florida team how their turnover chain went 🤨 pic.twitter.com/8fHgAGM4eQ

When asked about the chain, Napier was quick to shut it down. That will not be happening under his watch and nobody informed him that the chain was going to be used at all during the spring game — which probably isn’t a great thing, considering that a head coach should probably know of the prop.

Billy Napier on the turnover chain: "Nobody ran that by me. That ain't gonna happen."

There will be no turnover or touchdown chain in Gainesville this year.