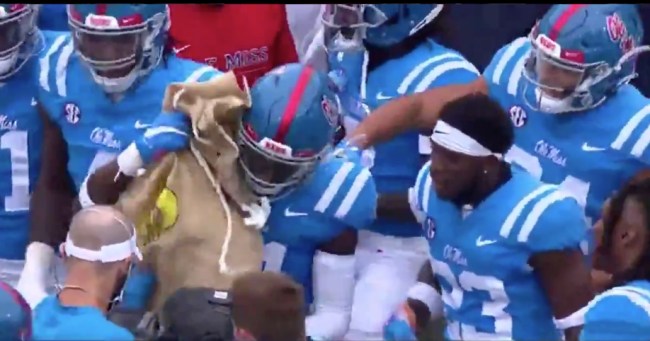 There weren’t many certainties heading into the 2020 college football season, but everyone knew that Lane Kiffin was going to bring an entirely different, fun culture to Ole Miss in his first year as head coach. We saw just how fun things are going to be in Oxford after Ole Miss intercepted a pass against Florida on Saturday.

Forget about a turnover chain or anything like that, Ole Miss has introduced an actual money bag to the turnover celebration game.

Bringing a money bag into the mix at Ole Miss is a bold move after the program just recently got off of probation after allegedly paying recruits, just like every other big-time program in college football does, only the Rebels got caught. Oh, and there was that whole thing where Hugh Freeze was maybe calling prostitutes on a work-issued phone.

That’s all in the past tho, the Lane Train is running things in Oxford. The Rebs may go through some growing pains in his first season, but they’re going to be one of the most fun mediocre teams in the country. Oh, and how about those powder blue uniforms?