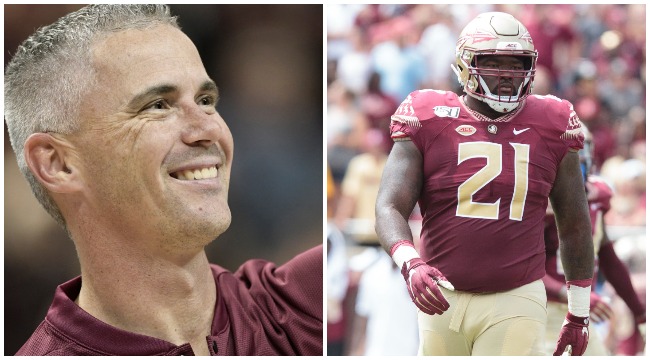 Less than six months after signing on as the head coach at Florida State, Mike Norvell has found himself in a little pickle.

Norvell, who left Memphis for a six year deal at FSU worth $3.75 million in December, told The Athletic’s Tashan Reed that he “went back and forth individually with every player this weekend” about the protests following the murder of George Floyd.

This wouldn’t be controversial, if he wasn’t lying.

Seminoles team captain and First Team All-ACC defensive tackle Marvin Wilson called his new coach on his bullshit on social media, and announced that the team will not be taking the field until further notice as protest of Norvell’s fib.

Man this 💩 did not happen mane. We got a generated text that was sent to everybody. There was no one on one talk between us and coach. This is a lie and me and my teammates as a whole are outraged and we will not be working out until further notice 💯 #hunchoout https://t.co/6Uuy6K7Eu3

Imagine having a coach that sends a mass text to his players pretending to care while also lying to the media so he can get a pay on the back. What next? Norvell going to get Brees in for a pre-game pep talk?

During his most recent appearance on ESPN morning program, “Get Up,” SEC Network host Paul Finebaum dubbed Norvell’s oopsie a “cataclysmic beginning.”

“It’s fairly shocking. I mean remember, Mike Norvell came from Memphis – this is his first year,” Finebaum said on the show. “He took over for Willie Taggart, who failed to follow Jimbo Fisher – and I can’t think of a worse beginning for a coach.

“And again, I want to hear, and I think we all want to hear, from Norvell. He has a really good reputation as a football coach. But if this is true. I mean, this is a cataclysmic beginning at an inflection point time in history when you would just make something up to try to look like you’re keeping up with everyone else. I mean I’m quite shocked to hear the story so far.” [via Saturday Down South]

Mike Norvell really hopped on this here internet and told us to our e-faces that he had 1 on 1 conversations with all 85 of his players.