Florida And Florida State Players Get In Pregame Scuffle, Have To Be Separated As Chomps And Chops Fly 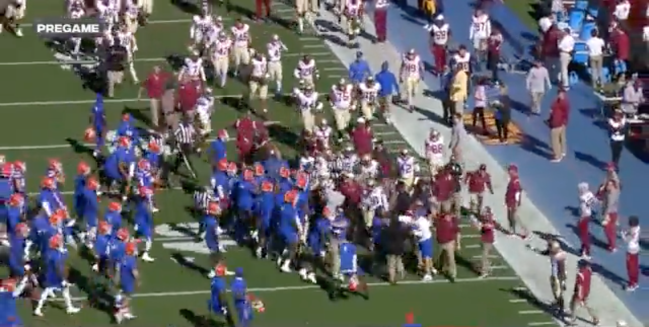 Rivalry week is the best week of the college football season. Tensions, emotions and deep-rooted hatreds are at an all-time high, records go out the window, and two teams that can’t stand each other run full-speed at one another for 60 minutes.

When it comes to rivalries, Florida and Florida State — although played less and less in recent years — is one of the most hostile. Especially this year.

Neither the Seminoles nor the Gators had reached the six-win mark prior to this weekend. To reach a bowl game, a team needs six wins.

Both teams had five wins entering the Sunshine Showdown, so the winner would reach a bowl eligibility and the loser would have its season come to a close. Needless to say, this year’s iteration of the rivalry meant just a little bit more to both programs.

As such, things got chippy quick. Before the game even began, the two sides got into it.

As #FSU was leaving the field, Florida made its way over to talk to them a bit. Sure it was a perfectly friendly conversation. pic.twitter.com/ZfeZYYn0BA

Florida State was headed to the locker room after warmups and the Florida team moved its way over to the sideline, almost begging to throw hands.

Here is the view from the sideline as the two sides exchanged chomps and chops.

Even in a down year for Florida, the rivalry with Florida State still runs deep pic.twitter.com/CEvJ9hrArC

Not long after that, just minutes into the first quarter, Florida State defensive lineman Robert Cooper was caught up in an on-field scuffle. Florida offensive lineman Gerald Mincey got up in Cooper’s face and was flagged for unsportsmanlike conduct.

Gerald Mincey hit with an unsportsmanlike penalty after the PAT.

It's been chippy since warmups.

Rivalry games just mean more. Especially when a bowl game and a potential winning season is on the line with a win over your in-state foes.