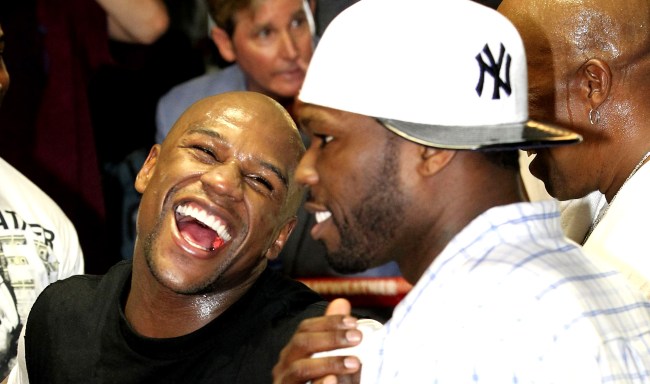 Floyd Mayweather just used a flame-thrower in his never-ending beef with his arch-enemy 50 Cent, saying the rapper has a “deadly” STD in an Instagram post.

Things between the two superstars appear to have been reignited when 50 Cent took to social media this week to troll Mayweather over the fact that several of his former girlfriends have ended up with other famous celebrities.

Fifty had previously fanned the flames of his feud with Mayweather earlier in the month saying Floyd was dressed like an old woman.

“Dats the granny drip,” he wrote.

On Thursday, the Money man fired back, with a missile launcher, posting a picture of an article which says 50 Cent’s ex and mother of one of his sons, Shaniqua Tompkins, claimed the rapper has herpes.

“Even your first born son’s mother, Shaniqua said you got herpes… but by the way your eyes look, it looks more like something deadlier than that,” wrote Mayweather.

Damn, Floyd, bringing family into the beef? It’s almost as if they really don’t like each other.

I’m not sure which celebrity “feud” I like better: Ryan Reynolds vs. High Jackman, The Rock vs. Kevin Hart, or 50 Cent vs. Floyd Mayweather.

On one hand Reynolds, Jackman, The Rock, and Hart’s feuds are obviously not real, which makes them easy to enjoy as they roast the living sh*t out of one another.

On the other, Mayweather and 50 Cent almost always go straight to the nuclear option with their savage trolling of one another, which too is highly entertaining.

Regardless, thank God for the internet or we wouldn’t know about any of them.