Floyd Mayweather Jr. Says He Has No Clue How His Lengthy Feud With 50 Cent Even Started In The First Place 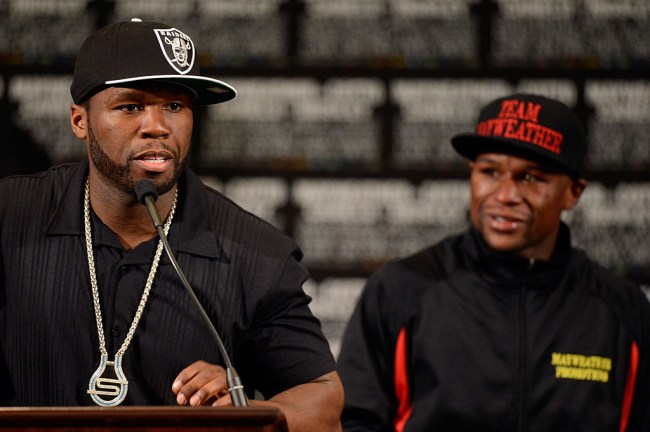 Over the course of his career, Muhammad Ali engaged in a war of words with almost every opponent he faced and cemented his status as one of the best trash-talkers in the history of sports thanks to his ability to justify his comments by absolutely pummeling dudes in the ring.

Much like the boxing world, the hip-hop landscape has been historically littered with braggadocio, as countless rappers have constantly proclaimed they’re the best in the game stretching almost all the way back to the genre’s inception and virtually every artist to achieve mainstream success has namedropped the luxuries they’ve been able to obtain with their riches at some point.

In the mid-90s, the game got particularly heated after rappers on opposite coasts of the United States started firing figurative shots at each other that eventually led to the literal ones that saw Tupac Shakur and The Notorious B.I.G. gunned down in their prime.

It was around this time that a Queens native named Curtis Jackson decided to try his hand at hip-hop, and in 1999, he recorded a song called “Ghetto Qur’an,” a track in which he reflected on his time dealing drugs as a teenager in which he dropped the names of a number of members of The Supreme Team, the gang that ruled the South Jamaica neighborhood where he grew up.

The surviving members of The Supreme Team apparently didn’t take too kindly to being exposed by the man who eventually dubbed himself “50 Cent” and it’s believed the record played a major hand in the shooting he was at the receiving end of in 2000, where he managed to survive in spite of being hit by nine bullets.

50 has found himself engaged in an impressive number of beefs since then, including a recent squabble with Ja Rule that inspired him to buy 200 seats at one of Ja’s concerts to ensure the front rows were entirely empty when he took the stage.

However, there is perhaps no feud of his that’s more notable than his longtime beef with Floyd Mayweather Jr. that stretches back to the middle of the last decade and perhaps no moment more memorable than when 50 offered to donate $750,000 to a charity of the boxer’s choice if he could successfully manage to read a single page of a book in the Harry Potter series (which he eventually downgraded to The Cat in the Hat).

The bad blood between the two men has increasingly boiled over the past couple of years, as Mayweather has repeatedly accused 50 of having herpes and offered to give fans $1,000 to brutally roast the rapper on Instagram while the two have constantly gone back and forth.

A couple of years ago, XXL published a timeline of the feud between 50 and Mayweather and noted they used to be good friends before a rift formed between them—a rift that the boxer apparently still doesn’t understand the origins of.

According to Complex, Mayweather recently made an appearance on the Drink Champs podcast, where he chatted with N.O.R.E. and DJ EFN and revealed he has no idea what the hell happened between him and 50.

“I don’t know if he got upset. One day I saw on the internet [that] 50 Cent said something about me. That’s my family. I was with that motherfucker every day.

Of course, I didn’t know what was going on. But I’m a fighter, you shoot at me, I shoot back. I can’t keep playing the back and forth game…I’m a fighter. Like a promotion for a fight. We talk and talk and talk. If we’re not going to do anything, just let it go. That was it.”

We might not know what started their rivalry, but based on how much it’s entertained me over the years, I sincerely hope it doesn’t end at any point in the near future.