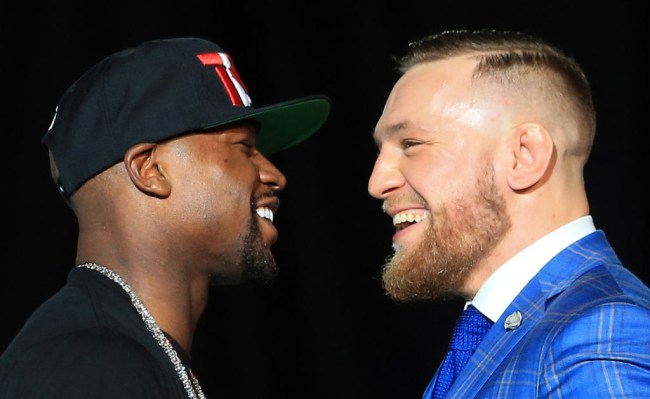 We are closing in fast on the August 26th date for the FIGHT OF THE CENTURY between Floyd Mayweather and Conor McGregor. And with ticket sales, as of last check, how shall I put it, a little tepid, Floyd Mayweather is out doing his best to try to drum up some more interest.

Now Mayweather is even going so far as to try to paint himself as the old man, the underdog, the guy who should really be concerned because on paper Conor McGregor should really win this fight. Riiiiight…

Speaking with ESPN’s Stephen A. Smith, the 40-year-old Mayweather had a lot to say about McGregor and the upcoming fight. Most of it unbelievable.

Yeah, he looked super concerned here about a week ago…

Anyone buying this yet?

“I used to have a 90 percent knockout ratio,” Mayweather said of his punching power early in his career. “It’s obvious I slipped somewhere. Something has taken a toll on my career.”

Nope. Sorry, Floyd, I still give McGregor about 1 chance in 100 of winning this thing.

“This can’t be a defensive fight. I have to go to him,” Mayweather said of McGregor. “I owe the public because of the Pacquiao fight. They weren’t pleased with that. They’re gonna be pleased with this fight here.”

I’ll believe that when I see it.