Whoops, Not Many People Are Buying Tickets To See The Mayweather Vs. McGregor Fight So Far 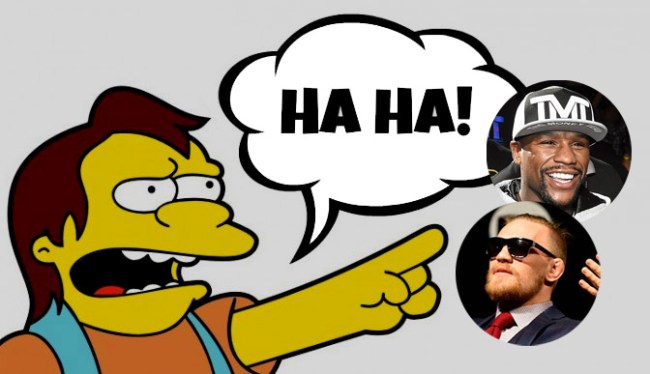 With the way it has been hyped to the moon and back (World Tour, anyone?) one might think that the Floyd Mayweather vs. Conor McGregor FIGHT OF THE CENTURY would have sold out all of its tickets the day they went on sale. That day was July 24th and well, there are still PLENTY of tickets to be had.

So why aren’t people snapping up THE HOTTEST TICKET IN SPORTS? Turns out that maybe people’s interest in this fight isn’t as great as the McGregor, Mayweather, and the fight’s promoters would have you believe. Oh yeah, it also might have a little something to do with the ticket prices for the fight which takes place at the T-Mobile Arena in Las Vegas on August 26th. Either that, or millennials have now also succeeded in killing combat sports too.

According to ESPN, it’s a little bit of all of the above…

A check online Saturday revealed hundreds of seats still available from Ticketmaster at the T-Mobile Arena for the Aug. 26 fight. There are so many open seats that fans with enough room left on their credit cards can buy six tickets together in 162 different spots throughout the arena.

That might be because of the astronomical prices set by promoters — the cheapest tickets still available on Ticketmaster have a face value of $3,500. Or maybe fans are just waiting for the right time to buy, hoping the price will go down.

Either way, promoter Leonard Ellerbe isn’t terribly concerned. He says the fight will not only sell out, but break records for the richest gate.

Of course that is what Leonard Ellerbe would say. If he didn’t, then how could they promote the fight as the “richest of all time?”

Turns out even sales on sites like StubHub and SeatGeek are also tepid.

“There’s fairly little sales going on in general,” said Chris Leyden, a content analyst for SeatGeek.com. “I think a lot of it has to do with where prices are now. I think people are a little uncomfortable paying this much or maybe even more.”

The situation is much the same at StubHub, where demand for tickets is lower than it was at the same time before Mayweather’s fight with Pacquiao two years ago.

“We’re not necessarily seeing demand levels for the fight yet,” said Johnna Hoff, a StubHub spokeswoman. “The encouraging part is people are buying some tickets.”

Oh, and for those millennials I joked about. It’s not really a joke, according to ESPN…

The demand for the fight is being driven largely by UFC fans, who tend to be younger than boxing fans and may not have pockets quite as deep.

On the plus side, if you still want to attend the fight, there are still plenty of hotel rooms available. At $300 to $400 a pop. (Yet another reason why sales might be so low.)