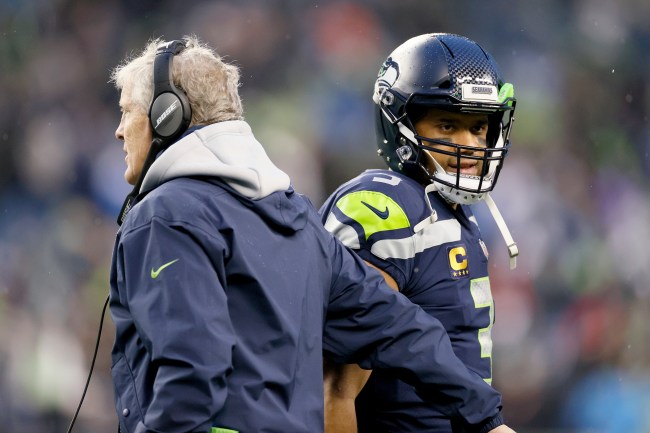 Russell Wilson’s future has been a hot topic around the NFL this season and it figures to continue as a major topic of discussion as trade rumors swirl. Lately, it has become especially popular to speculate on a potential move to the New York Giants.

Today on “Get Up”, former New York Jets general manager Mike Tannenbaum joined the list of people who believe Russell Wilson should end up in New York.

.@RealTannenbaum wants to see Russell Wilson as the Giants QB 👀

"It's the biggest stage in the world! I think that suits Russell and his wife [Ciara]. And I think it would make a great story for the NFL and New York."@Realrclark25 was NOT having it 😂 pic.twitter.com/2rnvGRG0eN

I know that this is a popular opinion these days, but it just doesn’t make sense. First of all, there’s the point that Ryan Clark already addressed in the same clip. Russell Wilson has said his plan for the future is to win Super Bowls. His chances of doing that don’t get better in New York.

A move to the Giants also does not fix any of the main problems he has reportedly had with the Seahawks. Wilson has been unhappy with the Seahawks’ blocking issues. The Giants offensive line isn’t good and even if they draft a lineman in the top 10 this year, it will take time for it to get better.

Wilson has also been unhappy with the Seahawks not “letting him cook” The Giants won’t let Russ cook either. They’re too invested in Saquon Barkley. Giving up on Barkley as a workhorse back would be an admission that they were horribly wrong when they took him with a top 5 pick.

IT’s hard to see that happening. Joining the Giants would also downgrade the personnel around Russell Wilson.

He currently has two of the league’s top receivers at his disposal and a reliable tight end. The Giants have Evan Engram, who has been a disaster of a 1st round pick. They have Kenny Golladay, who has 0 touchdowns for the team and a monster contract.

We don’t know what Kadarius Toney is yet in the NFL except injured a lot. Sterling Shepard can’t stay healthy. Darius Slayton has regressed this season. Why would you leave Tyler Lockett and DK Metcalf for that?

Maybe Russel Wilson will actually leave the Seahawks this offseason. There are QB needy teams out there who could appeal to him. I just don’t see any reason why that team would be the New York Giants.