Watch Shaq Take On UFC Legend Forrest Griffin Inside The Octagon, Get Choked Out By A 115-Pound Female Fighter 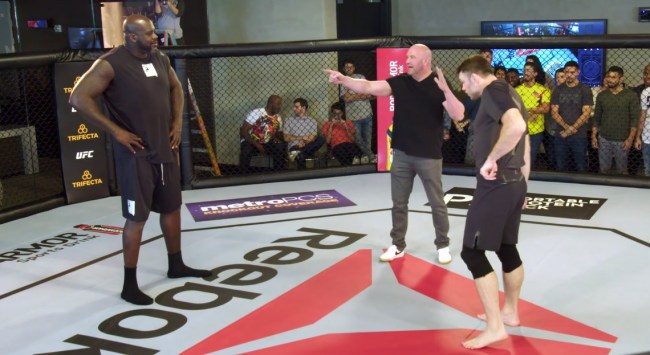 What? You didn’t know Shaq had a new chicken restaurant-themed reality TV show coming out? Where have you been?

Over the weekend, a new video from Big Chicken Shaq hit the web and if you watch no other bits from the show, you need to watch this one.

In it, we get to see Shaq take on UFC Hall of Famer Forrest Griffin inside the octagon at the UFC Performance Center with UFC President Dana White as the referee. It’s truly one of those “never thought I would see that” moments.

Gadelha, who owns a 16-3 record in MMA, as well as a Brazilian jiu-jitsu black belt, took advantage of The Big Aristotle being completely gassed after five minutes grappling with Griffin to lock in a choke that caused Shaq to tap and Griffin to look a little bit concerned about Shaq’s safety.

Speaking to For The Win about his UFC experience, Shaq said, “I’m gonna blow my head up pretty high for not getting submitted because when you cross over into somebody’s sport talking all that trash you better be able to back it up.”

As for Gadelha’s sneak attack, Shaq explained, “I was supposed to wrestle her next, but she saw me wrestle with Forrest and she realized she couldn’t beat me. Because I told her, I said, ‘Listen, little young lady, if you can make me tap out I’ll give you $10,000 right now.’ So then she came in in the back and got me when I wasn’t looking.”

So after that, does Shaq, a big UFC fan, think he might have been successful had he pursued MMA instead of the NBA?

“Probably not that world, probably the WWE world,” he said, adding, “I like to fight, but I don’t like to fight that much.”

Read the rest of Shaq’s take on the unique crossover event here.