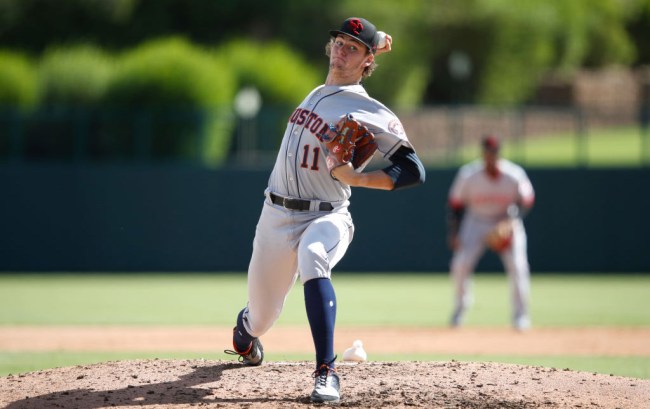 Houston Astros’ pitching prospect Forrest Whitley showed off his rocket for an arm Tuesday afternoon by hitting 110 mph on the radar gun. His potentially future teammate Justin Verlander was not impressed.

The 6-foot-7, 21-year-old Whitley was the Astros’ first round pick (17th overall) in the 2016 MLB Draft, taken straight out of Alamo Heights High School in San Antonio.

So far he has pitched in Rookie League, A-Ball, Double-A, and the Arizona Fall League where he posted a 2.42 ERA with 36 strikeouts to just 7 walks in 26 innings this year. In all, Whitely has struck out 239 batters in 163-1/3 innings. He also served a 50-game suspension in 2018, missing a big chunk of the Minor League season after testing positive for PEDs.

Oh yeah, he can also throw a baseball 110-miles per hour. (With a running start, which makes it no less impressive.)

This is actually a thing that pitchers do, called a “pulldown” which Jake Mintz at MLB.com explains is meant to increase a pitcher’s velocity when they step back on the mound if it’s carried out regularly.

This is also not the first time we have seen a professional pitcher throw a baseball 100 mph-plus using this technique.

And then in January of this year, Cleveland Indians’ hurler Trevor Bauer clocked in a throw of 116.9 mph.

As for Verlander’s reaction to Whitely’s cheddar, it was pretty funny.

Trevor Bauer also weighed in, but he was more interested in what happened when the video cut off than the baseball throw.

Was there a glove throw after? Did we get that on the gun? Haha

Did he lokate it tho?

Turns out, Whitely cut the video off because of language…

Too much profane language was said after the throw lol

Wonder why he seemed so angry?