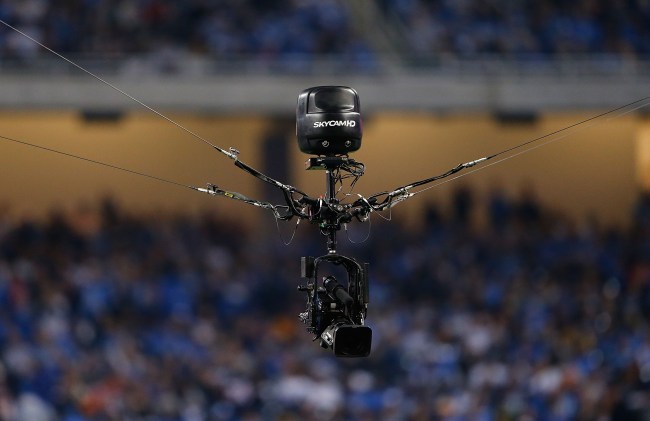 If NFL fans are talking about something tangentially related to the actual playing of football, 99 times out of 100 it’s negative (See: the officiating, Troy Aikman looking high as giraffe balls in the booth, the officiating, Roger Goodell, and the referees).

Well, I am pleased to announce that Fox has done the impossible and forced Twitter to put away its pitchforks and frozen the fingers of keyboard warriors from every fanbase. For one moment on Sunday, NFL fans united to heap praise on Fox Sports’ incredible skycam view that made Cordarrelle Patterson’s 102-yard kickoff return for a touchdown look like poetry in motion.

It is being described by many as “the greatest camera angle in the history of the NFL.”

This was the greatest camera angle in the history of the NFL. pic.twitter.com/Vi9Xwf78lW

The Skycam requires one operator piloting the camera another across the field focusing the lens. While Skycams have been around for a while, networks have hopped on the trend of using dual Skycams, one which hovers between 12 and 40 feet above the turf and a second at 40–80 feet, for maximum perspective.

I don't smoke, but I need a cigarette after watching that camera angle. pic.twitter.com/AZhdltCkmx

Half-expected the field to start exploding and Bane to walk out.

This might be the best view of any NFL play we’ve ever had. You can see the speed, quickness and vision of the returner. This is beyond awesome for the fans. pic.twitter.com/D8xa5RSM6F

Control center: we’ve never stayed this long get em out of there!

Give this cam operator an honorary Oscar nomination for Cinematography.

What’s more of a game-changer: the NFL’s skycam view or the MLB’s ‘Umpire’s Nutsack’ view?

We need this camera angle for the Playoffs 🍿🔥 pic.twitter.com/3XvJAjfcC5