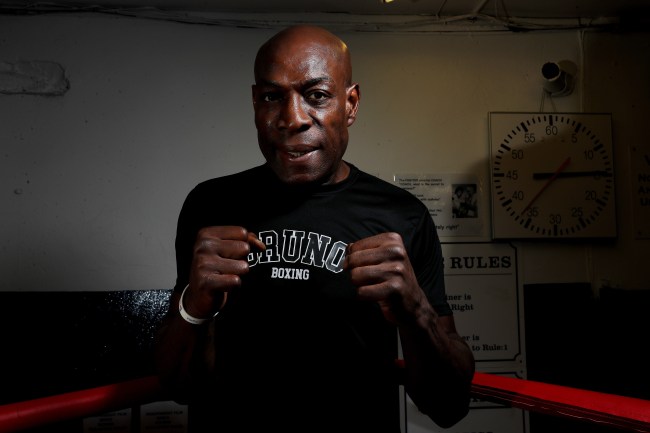 The callout of Tyson Fury has become all too common these days. Just about every heavyweight in the world wants a shot at him. Jake Paul keeps talking about him and his brother. Now a surprising new name has entered the fray.

That name is none other than retired heavyweight Frank Bruno. While talking to DAZN Boxing, Bruno had some interesting thoughts on Tyson Fury.

🗣 "I'd have eaten @Tyson_Fury for dinner and breakfast as well"

We'd have LOVED to have seen @frankbrunoboxer take on Tyson Fury 🍿

It’s one of the oldest debates in the world of sports. How would Athlete X fare if they competed in a different era? Usually the debate centers around top athletes from their own era. In this case, it is the current best heavyweight boxer in the world against a one-time title winner who retired 25 years ago.

While there are some opponents from the 90s that would have been interesting for Fury, I’m not sure that Bruno is one of them.

Bruno went 40-5 in his career and was well-known for his power. Bruno racked up 38 KOs in his career, but regularly fell short in the big fights. He was 2-4 in title fights in his career.

On the other hand, Tyson Fury has run through every obstacle he has faced in his career. Fury has won numerous title fights and is widely regarded as the world’s best heavyweight.

We’ve already seen Tyson Fury take on the heaviest hitter in his division 3 times. There’s an argument to be made that Fury won all 3 and survived the biggest shots Deontay Wilder had to offer.

I know some people like to hype up their glory days, but it seems like Frank Bruno is stretching things just a bit here.