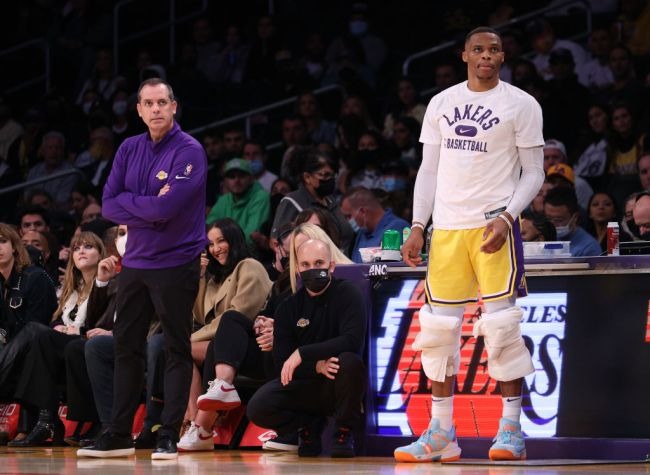 The Frank Vogel era in LA appears to be coming to a close, but the veteran head coach isn’t going down without taking some parting shots while on his way out.

On Tuesday, The Athletic reported that Vogel’s job was in serious jeopardy, and he could be fired in the coming days.

From @sam_amick and me: Frank Vogel was close to being fired after Saturday’s 37-point loss and remains in jeopardy of losing his job, even after the Lakers bounce-back win over Utah. He is being evaluated game-to-game, sources told @TheAthletic. https://t.co/Sh5q2AVjmi

The Lakers lost to the Indiana Pacers a day after The Athletic’s report, and many fans noticed that Westbrook was benched in the last four minutes of the game.

Frank Vogel leaves Russell Westbrook on the bench at the end of a tight game when his coaching future is, as @theathletic reported yesterday, being evaluated game-by-game. That doesn't speak volumes, it's screaming.

The media asked Vogel about Westbrook’s absence, and he responded by appearing to throw shade at the superstar guard.

Frank Vogel on his decision to sub out Russell Westbrook for the final four minutes of the game: “Playing the guys that I thought were going to win the game”

Coach Vogel was asked why he benched Westbrook down the stretch. He replied: “(I’m) playing the guys I thought were gonna win the game.” pic.twitter.com/5wEnu2ZBKg

Update: Westbrook refused to speak to the media after the game.

Russell Westbrook left the arena without speaking to reporters tonight.

Fans are convinced Vogel has coached his last game after his comment about Westbrook went viral.

I love this so much. They’re determined to make Vogel the scapegoat for the dumb Westbrook trade and a broken roster, and he knows it, so he’s going down swinging. https://t.co/GvIhJSGVbi

Frank might be relieved of his duties as soon as his presser is over. https://t.co/p6tNxRjw32