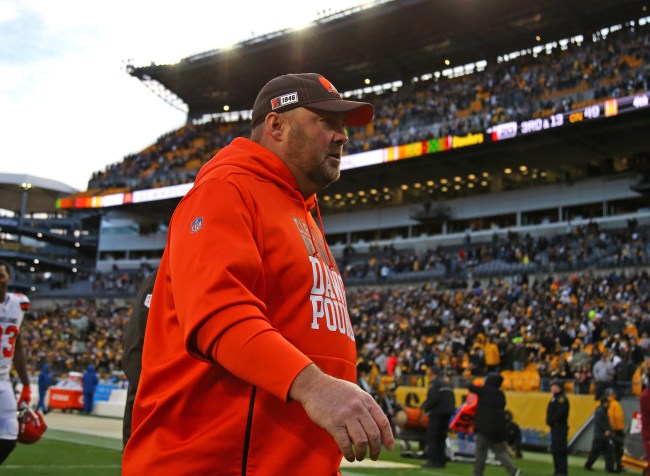 Freddie Kitchens doesn’t appear to be the man to turn the Cleveland Browns around. Sure, as a lifelong Brownies fan myself, I had high hopes that the long-suffering franchise (finally) got it right by hiring the first-time head coach after his limited success with quarterback Baker Mayfield last season, but, in the NFL, you are what your record says you are, and Kitchens sits at 5-7 with a roster as talented as any in the league.

Now, does that mean the Browns should jump ship and can Freddie Kitchens tomorrow? It seems like that’s the organization’s M.O. — firing head coaches due to underachieving and pressure from diehard fans, especially before they even have a chance at turning things around. It’s for that reason that former NFL wideout Brandon Marshall urges the Browns to keep Kitchens, as he explained to TMZ Sports.

“I didn’t like him wearing that shirt. It made no sense for him to do that. Nothing that justifies that,” Marshall said … “But, I hate letting a coach go in the first year.”

Marshall suggested keeping Kitchens around for a Prove-It year 2 … but “he’s gotta turn it around” — explaining there’s a serious problem with the culture in Cleveland.

“There are some cultural things he’s gotta fix.”

Look, Brandon Marshall does have a point. Not only do the Browns always overreact and don’t allow head coaches enough time to improve a team and culture, but they haven’t hired the right guys to even try. Maybe another season with Freddie Kitchens changes that — just as long as he’s still got the trust of his locker room and players.

As for Marshall’s opinion on Kitchens wearing a t-shirt prior to the Browns-Steelers rematch that read “Pittsburgh started it” in reference to the fight between Myles Garrett and Mason Rudolph, the former wide receiver’s right about it being a bad look. I mean, would Bill Belichick or Andy Reid ever do something like that? No, and it’s time for Freddie Kitchens to understand that, regardless of the reason he had it on, he’s an NFL head coach, not some high school coach who needs to pull tacky stunts like this to pump up his own players.