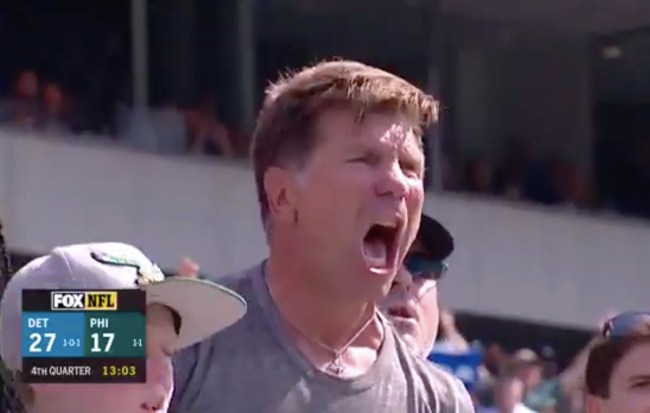 The Philadelphia Eagles lost (at home) during Week 3 of the NFL season to the Detroit Lions 27-24. One fan went viral, now known as ‘Furious Eagles Fan’ after he was seen in the stands spewing venom in a display that embodies the frustrations of pretty much every diehard NFL fan whose team has let them down over the years.

This game could be looked at under several different lenses. You could see this as the Detroit Lions finally living up to their supposed potential after years of underperforming on the road, o you could see this as a game where the Eagles pooped the game, got housed by those criminals in black/white stripes on the field, and were robbed at home by a team they should’ve easily beaten.

I wouldn’t ever presume to understand the inner workings of the Furious Eagles Fan’s mind but I wanted to share that clip/meme with you gents today since 1) he’s been identified and 2) he had a funny response about going viral on Twitter.

It all started with this clip. The man looks like he’s screaming so hard he’s about to blow an O-Ring out the other end:

This #Eagles fan is 100 percent right, whatever he's complaining about. pic.twitter.com/uQ8lVkWOeN

According to For The Win, this charged up fan is a ‘mild-mannered’ man by the name of Eric J. Furda who is actually the Dean of Admissions for the University of Pennsylvania, an Ivy League institution, one of our nation’s oldest universities, and home to one of the most elite business schools on the planet (Wharton):

That angry Eagles fan is the smiling, mild-mannered Eric J. Furda from Penn’s admissions page. Again, the screaming man from above is in charge of admissions at one of the world’s most prestigious universities, which is kind of awesome and gloriously Philly at the same time.

He had fun with his instant fame on Twitter where his handle is @DeanFurda. He retweeted this tweet:

Little kid right next to him. Thumbs up to you psycho fan

And added this commentary:

Bottom line is that calls were missed that were basic and also in place for player safety! Not sure what the refs were looking at today!

After further review of the play I will take the 15 yard penalty for unsportsmanlike conduct But I will not lose my passion for Philadelphia and Penn sports! Thanks for all the interview requests but we have a game on Thursday to get ready for which I will watch at home!

Side note: the referees someone missed this insane facemask in that game where the Eagles’ Miles Sanders just about had his head ripped off. So that man’s frustration was pretty warranted.

This was NOT called a facemask penalty.

The Detroit Lion who committed it was actually laughing on the sideline that he got away with it.

Fire every single one of your officials into the sun, @NFLOfficiating, you are ruining a great sport. pic.twitter.com/ZmGUqG6Eu0

Completely unrelated to this game, I’d just like to send a shout out to all of the U.Penn readers out there for partying as hard if not harder than any state school in the nation. I went to FSU, one of my best friends went to U.Penn and I flew up for Spring Fling one year and MOTHER OF GOD can those dudes drink.

I showed up to a 10-keg ‘kill the keg’ party and that was the tamest drinking we did all weekend. At one point they ordered an ENTIRE TRUCK full of Lion’s Head Beer delivered to the Beta House and the largest beer-a-mid I’ve ever seen was constructed before it was promptly drunk. And I don’t mean ‘a pickup truck’ full of beer, I’m talking one of those moving trucks full of cases of beer. It was wild.

I left that weekend wildly impressed with Penn’s ability to party, so much so that I skipped out on FSU’s Spring Break my senior year and joined up with the Penn guys to rage in the Dominican at an all-inclusive/all-you-can-drink resort where I’m pretty sure we drank the resort out of beer at one point

As the Dean of Admissions, this Dean Furda is the gatekeeper of the University of Pennsylvania and he appears to be doing a stellar job in my eyes.